The singer was accompanied by musician Akshayye Varma on the piano. 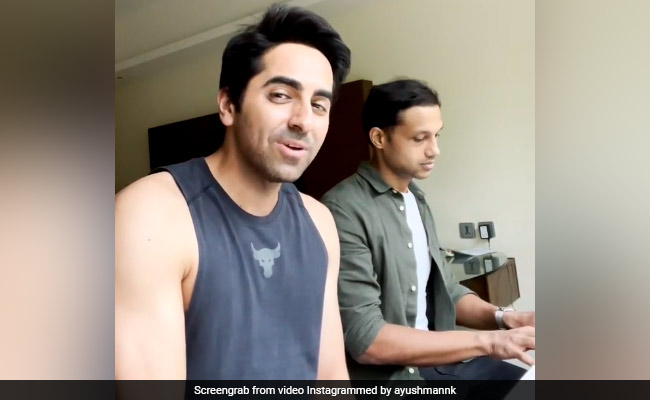 Ayushmann Khurrana in a still from the video. . (courtesy ayushmannk)

That Ayushmann Khurrana is an ardent fan of music maestro Kishore Kumar is a well-known fact. So it comes as no surprise that the actor chose to pay tribute to Kishore Kumar on his birth anniversary and as expected it was a musical one. And, we are sure fans of both artists would not have had it any other way. For the occasion, Ayushmann chose to sing the song Chookar Mere Mann Ko from the 1981 film Yaarana. The track was picturised on Amitabh Bachchan and Neetu Kapoor and composed by Rajesh Roshan.

Ayushmann recreated the song on Instagram with the able support of musician Akshayye Varma on the piano. Interestingly, Akshayye was Ayushmann's piano trainer for the film Andhadhun and is now the actor's dialect coach for Doctor G. Sharing the video, Ayushmann wrote, “Happy birthday Kishore da. You don't sleep the entire night and then record this early in the morning. And you don't get sleep because it's Kishore da's birthday. And I'm in his state Madhya Pradesh. Bhopal is treating me well. Khandwa, his birthplace is just two hours away from here.”

Introducing Akshayye, Ayushmann said, “And, please welcome Akshayye Varma, my musician friend, who trained me with the piano in Andhadhun. And now, he is training me with the dialect for Doctor G.”

In the video, Ayushmann seamlessly moves from the Kishore Kumar track to Moh Moh Ke Dhaage, a number from his film Dum Laga Ke Haisha.

Last year too, Ayushmann had shared a musical tribute on the occasion, accompanied, once again by Akshayye Varma. Sharing the video, the actor wrote, "Happy birthday, Kishore da. This video was shot in July 2018, Krakow, Poland. We were shooting the climax of Andhadhun, and Akshayye Varma and I jammed in between shots, as usual." In the clip, he is singing OMere Dil Ke Chain from the 1972 film Mere Jeevan Saathi.

Ayushmann's love for the legendary singer has also found a place in the characters that the actor has portrayed on screen. For instance, Akash Sarraf, from Andhadhun, and Abhimanyu Roy, in Meri Pyaari Bindu, are shown to be fans of the singer in the films.

In addition to being one of the greatest singers of Indian cinema, Kishore Kumar was also a prolific actor, filmmaker, screenwriter, director and producer. Some of his most popular songs include, O Majhi Re Apna Kinara, Yeh Shaam Mastani, Raat Kali Ek Khwab Mein and Chingari Koi Bhadke, Kuch Toh Log Kahenge, among numerous others. Kishore Kumar died in October 1987.

Remember This Swimsuit? Gul Panag's Been Wearing It For Over 20 Years