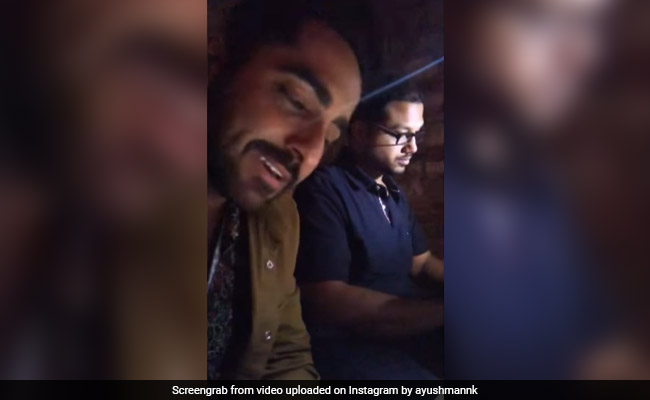 Ayushmann Khurrana in a still from the clip he shared. (Image courtesy: ayushmannk)

On singer Kishore Kumar's birth anniversary, actor Ayushmann Khurrana paid a musical tribute to him on social media. The actor shared a throwback BTS video from the sets of his 2018 film AndhaDhun, in which he can be seen singing the song O Mere Dil Ke Chain, originally sung by Kishore Kumar, from Rajesh Khanna and Tanuja's 1972 film Mere Jeevan Saathi. Musician Akshayye Varma can be seen playing piano next to the actor in the clip. Sharing the video, Ayushmann Khurrana wrote: "Happy birthday, Kishore da! This video was shot in July 2018, Krakow, Poland. We were shooting the climax of AndhaDhun and Akshayye Varma and I jammed in between shots, as usual."

Happy birthday Kishore da! #KishoreKumar This video was shot in July 2018, Krakow, Poland. We were shooting the climax of Andhadhun and @akshayvarma04 and I jammed in between shots, as usual.

Kishore Kumar was also a great actor and filmmaker. He was a screenwriter, an actor, a director and a producer. Some of his melodious songs are Jeevan Ke Safar Mein Raahi (Munimji, 1955), Hum Hain Raahi Pyar Ke (Nau Do Gyarah, 1957) and Ek Ladki Bheegi Bhaagi Si (Chalti Ka Naam Gaadi, 1958), to name a few. In his career, Kishore Kumar performed duet most of the times with singers Lata Mangeshkar and Mohammed Rafi. Kishore Kumar died in October 1987.

In terms of work, Ayushmann Khurrana was last seen in Gulabo Sitabo, in which he shared screen space with Amitabh Bachchan. The film, directed by Shoojit Sircar, released on Prime Video in June. Ayushmann Khurrana, who has done hits such as Vicky Donor, Shubh Mangal Zyada Saavdhan and AndhaDhun, recently announced his new project - a film by director Abhishek Kapoor.