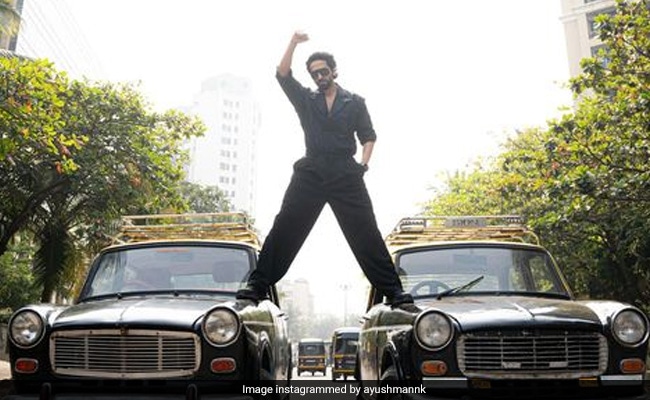 Ayushmann Khurrana, busy with the promotions of his upcoming film An Action Hero, is actively sharing fun posts on his Instagram profile and they keep getting better and better. After sharing a post about Shah Rukh Khan's Mannat and then a face-off with Tiger Shroff, the actor took a leaf from another action hero - Ajay Devgn. He posted a picture of himself performing a stunt on taxis, inspired by Ajay Devgn's iconic entry in the 1991 film Phool Aur Kaante, in which he balances on two bikes.

An Action Hero showcases the story of a movie star (played by Ayushmann Khurrana), who finds himself in major trouble after he is involved in an accident. A real life action hero (Jaideep Ahlawat)'s chasing Ayushmann to settle accounts doesn't make matters easy for the superstar.

Directed by Anirudh Iyer, An Action Hero has been co-produced by Bhushan Kumar, Krishan Kumar and Anand L Rai. The film is set to hit the theaters on December 2.

On the work front, Ayushmann Khurrana recently starred in Doctor G, co-starring Rakul Preet Singh, Shefali Shah and Sheeba Chadha. The actor will next be seen in Dream Girl 2 with Ananya Panday.