Avengers: Endgame - When Robert Downey Jr Had His Female Co-Stars Over For A 'Marvel'ous Lunch 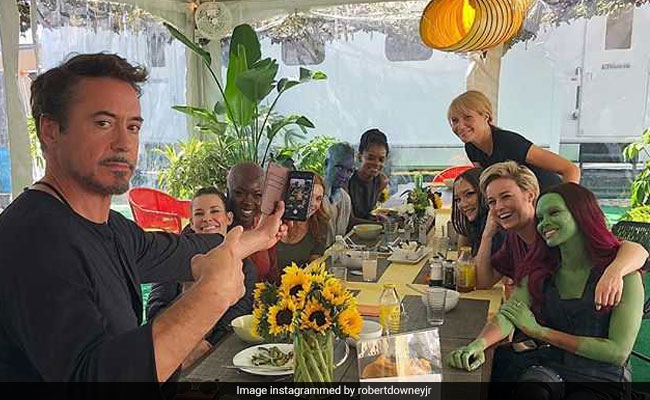 Robert Downey Jr delighted his fans by sharing a rare throwback picture on his Instagram profile on Wednesday afternoon. Robert Downey Jr aka Iron Man hosted a special lunch for the women of the Marvel family. The picture appears to be taken during the shooting of Avengers: Endgame as most of the actresses can be seen dressed in their respective costumes. The epic photograph shared by Iron Man doesn't feature Black Widow aka Scarlett Johansson. However, it does include Gwyneth Paltrow, who plays the role of Pepper Potts and Elizabeth Olsen, who stars as Scarlet Witch in the Avengers series. The picture also featured Danai Gurira, who portrays the role of Okoye; Zoe Saldana, who plays Gamora; Karen Gillan, who stars as Nebula, and Letitia Wright aka Shuri. Pom Klementieff and Evangeline Lilly, who play the roles of Mantis and The Wasp, respectively, can also be seen in the picture.

The 54-year-old actor shared a picture of himself along with the actresses from Avengers: Endgame. The other picture posted by Robert Downey Jr features the Endgame actresses happily posing for the camera as they sit at the dinner table. Robert Downey Jr captioned it: "#tbt #throwback #flashback to the women of Marvel studios. A lunch I had the pleasure of hosting... #girlpower #epic #bts." The picture received over 43 lakh likes on Instagram within a few hours.

#tbt #throwback #flashback to the #Women of @marvelstudios #mcu lunch I had the pleasure of hosting... #girlpower #epic #bts (@jimmy_rich ) #TeamStark #thankyou

Avengers: Endgame opened in theaters on Friday and it has emerged as a super hit across the globe. It is the final installment of the 'Infinity Saga' in Marvel's Avengers series and it was undoubtedly one of the most-awaited films of 2019.