Spoiler alert: In the context of the entertaining Endgame, this scene feels like pandering, a last-ditch effort to earn Brownie points 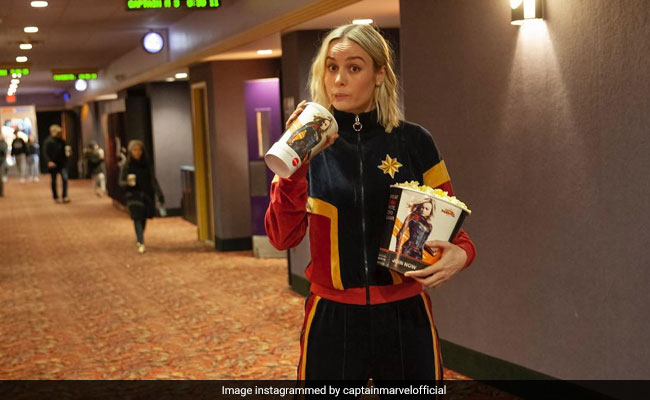 Brie Larson as Captain Marvel from a screening (courtesy captainmarvelofficial)

Marvel Studios hasn't always had the best track record when it comes to writing balanced roles for women, as has been pointed out a great deal since the big bang of the cinematic universe occurred more than a decade ago. Early on, if one of a film's few female characters wasn't relegated to being a powerful man's assistant, she might have been a special-ops agent who fought alongside male superheroes but whose narrative arc still took a back seat to theirs.

Great strides have been made since, but a particular battle scene in Avengers: Endgame, the record-breaking final installment in the MCU's current era, highlights the work that remains.

First, some background. In Endgame, the heroes who survived Infinity War devise a plan: They'll use the Quantum Realm to time-travel and retrieve the Infinity Stones from before Thanos (Josh Brolin) gets to them, bring the stones back to the present, harness their power to bring back the folks who died in Infinity War and, finally, return the stones to the time periods from which they were retrieved. Thanos finds out about the plan, and he descends upon present-day Earth with his army to re-wreak havoc before the heroes can return the stones. A battle ensues, during which a new gauntlet containing the stones is tossed from hero to hero en route to Ant-Man's van, an entry point into the Quantum Realm.

Spider-Man (Tom Holland) passes the gauntlet to Captain Marvel (Brie Larson) and eyes the far-off van. "I don't know how you're going to get through all of that," he says, gesturing to the rubble, flames and villainous sidekicks in her path. Suddenly, a confident voice replies, "Don't worry, she's got help."

The voice belongs to Okoye (Danai Gurira), leader of the Dora Milaje, an elite group of bodyguards made up of women who protect the Wakandan throne. One by one, other female MCU characters appear alongside Okoye in solidarity: Scarlet Witch (Elizabeth Olsen), Pepper Potts (Gwyneth Paltrow), Gamora (Zoe Saldana), Shuri (Letitia Wright), Mantis (Pom Klementieff), Nebula (Karen Gillan) and Valkyrie (Tessa Thompson). The scene lasts less than a minute but is guaranteed to evoke some sort of reaction from theater audiences. (This reporter sat next to a man and a woman who both gasped loudly.) As with a remarkably similar battle scene in "Infinity War," it was clearly designed to have that effect.

But in the context of the supremely entertaining Endgame, this scene feels like pandering, a last-ditch effort to earn Brownie points from those who have previously criticized the MCU's gender imbalance. Nebula aside, these characters barely appear elsewhere in the film - which makes some sense, given that "Endgame" primarily serves to finish off the original Avengers' arcs. But with that in mind, it's difficult not to notice the glaring absence of Black Widow (Scarlett Johansson), the sole female member of the core group.

Black Widow doesn't join the #girlgang because she can't. When she and Hawkeye (Jeremy Renner) travel back in time to retrieve the Soul Stone from the planet Vormir, they learn, as Thanos and Gamora did in "Infinity War," that one of them must sacrifice their life in exchange for the stone.

They first duke it out verbally, with Hawkeye arguing that he doesn't deserve to live because of the murder rampage he carried out as Ronin after Thanos's snap killed his wife and children. But when the tussle eventually leaves the pair dangling off the edge of a cliff, Black Widow implores her friend to let her go. She says the Avengers are the only family she's ever had, so she owes it to them to do "whatever it takes." (There's also an implication that Hawkeye should go on living because he has a family - a bit icky, given the "Age of Ultron" revelation that Black Widow is unable to bear children.)

Black Widow spends the first half of Endgame establishing herself as an essential member of the team; she is the only one who remains steadfast in her mission to reverse the damage Thanos did, a display of grief that develops the character as other MCU films have only briefly done through glimpses of her former assassin life. But in death, she is once again reduced to a secondary character. The Avengers grieve Black Widow, but the loss primarily serves to motivate them, whereas other endings - such as the death of Iron Man (Robert Downey Jr.), who also sacrifices himself, or Captain America (Chris Evans) getting to grow old with the love of his life - carry an emotional heft that satisfyingly completes the character arcs.

But there's hope yet. While the heavy-handed battle scene highlights Black Widow's mistreatment, Marvel could make amends with the expected Black Widow prequel. As for the other women, we look to Captain Marvel, who valiantly leads her peers through battle just as her extraordinarily successful film, the studio's first to have a female director, might for future MCU projects.