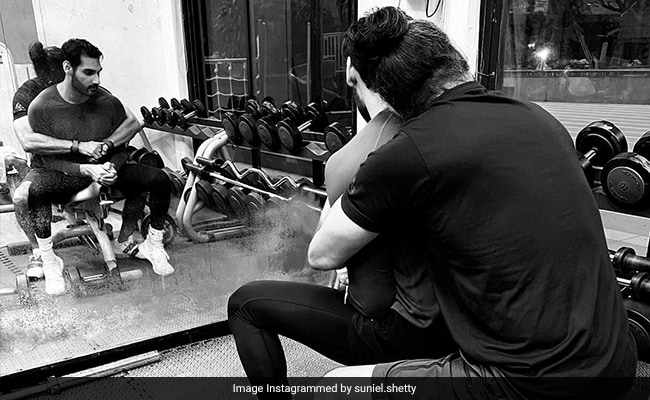 Suniel Shetty has treated his Insta family to an adorable picture of him with his son Ahan Shetty, and it's all about love. The actor has shared a monochrome picture in which the father-son duo can be seen in a gym. In the image, Suniel Shetty can be seen hugging his son from behind as they sit on a bench in front of the mirror. Along with the image, the veteran actor wrote a quote that read, "Fathering is not what perfect men do, but something that perfects the man '' Frank Pittman." He used the hashtags, "father son, life, my heart, my soul, my son my world". Soon after he shared the post, his daughter Athiya Shetty dropped a heart emoticon in the comment section, while her boyfriend and cricketer KL Rahul liked the post.

Suniel Shetty's son Ahan Shetty made his Bollywood debut with the movie Tadap, co-starring Tara Sutaria. The movie garnered mixed reviews from the audience and critics.

Meanwhile, Suniel Shetty's daughter Athiya Shetty and her boyfriend KL Rahul are again in the news over their rumoured marriage. Pinkvila quoted a source close to the couple saying that Athiya and KL Rahul will get married a few months from now, and the venue will be Suniel Shetty and Mana Shetty's Khandala bungalow.