Asin's Daughter Arin, 18-Months-Old, Is The Cutest Ballerina Ever

Arin, who is 18-months-old, was dressed in a ballerina outfit in the picture. 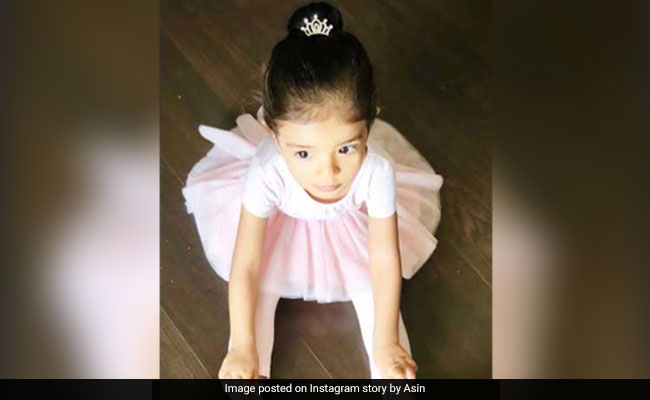 Social media recluse Asin shared an adorable picture of her daughter Arin on Wednesday on Instagram Story. Arin, who is 18-months-old, was dressed in a ballerina outfit in the picture. It also appears that the picture was taken in a ballet studio. Asin, who is best-known for her role in films such as Ghajini, Ready and Housefull 2, shared the first pictures of her daughter a year after she was born. Asin married Micromax founder Rahul Sharma in 2016 and their daughter Arin was born in October 2017. For the first year, Asin was reluctant about sharing pictures of her little one, however, she warmed up to social media after posting pictures of Arin from her first birthday party. 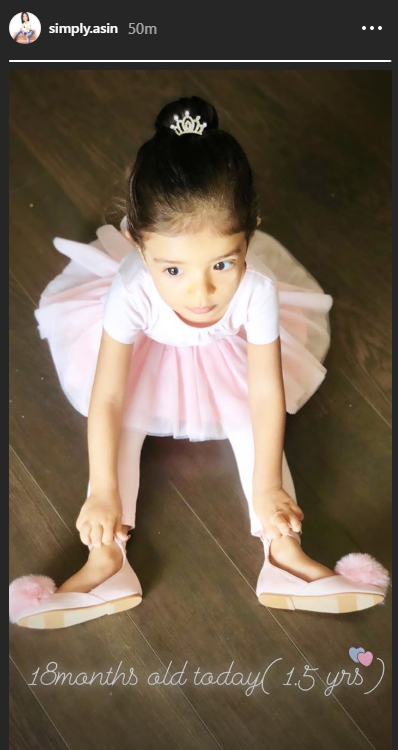 And here are pictures of Arin shared by Asin and Rahul on their respective social media accounts:

a little girl who loves outdoors, travel and books..turned ONE #Arinturnsone

A year ago we welcomed a Gorgeous, bright eyed, little angel into this world. She just turned ONE!!! Where does time fly? Happy Birthday ARIN, my daughter! Why do u have to grow up so fast? Happy 1st Birthday!#Arinturnsone#ArinsFirstBirthdaypic.twitter.com/Iklqpnf98w

After posting photos from the birthday party, Asin also shared a picture of Arin dressed in Santa Claus' costume (not including the beard) sleeping peacefully in her father's arms:

Asin made her big screen debut with Malayalam film Narendran Makan Jayakanthan Vaka in 2001 and she went on to star in several regional projects including Sivamani and Gharshana in Telugu, and Majaa and Pokkiri in Tamil. Asin starred in the Telugu version of Ghajini and then in the film's Hindi adaptation with Aamir Khan in the lead role.

In Bollywood, she has also featured in films such as Bol Bachchan, Khiladi 786 and All Is Well, also her last screen outing.