Ashmit proposed to Maheck Chahal in Spain. She wrote: "He stole my heart, so I'm going to steal his last name. I said yes" 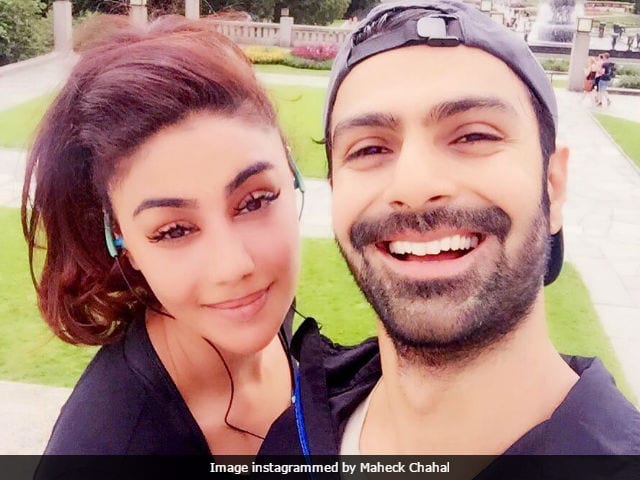 New Delhi: Ashmit Patel proposed to actress Maheck Chahal (best known for her roles in Wanted and Nayee Padosan) in Spain during their recent holiday. The actor shared a picture of the moment when he proposed to Maheck, who said, 'Yes.' Ashmit shared the picture today and wrote on Instagram: "She said YES!!!" and added hashtags like #engagement #partnerforlife and #yesididit. Maheck shared the same picture on her Instagram page and wrote: "He stole my heart, so I'm going to steal his last name. I said yes." Meanwhile, Ashmit's ex-girlfriend Riya Sen married her long-time boyfriend Shivan Tewari on Wednesday in Pune.

Ashmit told Bombay Times that he initially wanted to propose to Maheck in Paris but that plan couldn't materialize. From what Ashmit told the daily, the Spain proposal sounds pretty romantic too. "Maheck has a habit of having dessert after dinner, and I had decided to propose then. However, on that night, she did not ask for any dessert. So, I excused myself and asked the waiters to get some strawberries dipped in chocolate. I then placed the ring on the plate with strawberries, under a bowl which was placed upside." Maheck told Bombay Times: "I was so surprised, that I laughed out loud. Since we were not sure which finger - right or left - the ring should be worn on, we paused for a while. He then went down on his knees and the entire restaurant cheered for us. It was a very romantic proposal."

Ashmit Patel said that they may get married by the end of the year and while he wants a destination wedding abroad, Maheck's parents want their wedding to be in India.

Promoted
Listen to the latest songs, only on JioSaavn.com
Ashmit Patel debuted in Bollywood in 2003 film Inteha and has starred in films like Murder and Fight Club - Members Only. He was last seen in 2014's Jai Ho, starring Salman Khan. Maheck Chahal's first Hindi film was Nayee Padosan. She is best known for her song appearances in films like Chameli, Kedi and Yamla Pagla Deewana.

Ashmit Patel and Maheck Chahal have participated in controversial reality show Bigg Boss but in different seasons. Ashmit stood third in season 3 while Maheck was the runner-up of season 5. Together Ashmit and Maheck have participated in reality show Power Couple, which was hosted by Arbaaz Khan and Malaika Arora.
Comments
ashmit patelmaheck chahalashmit patel engaged