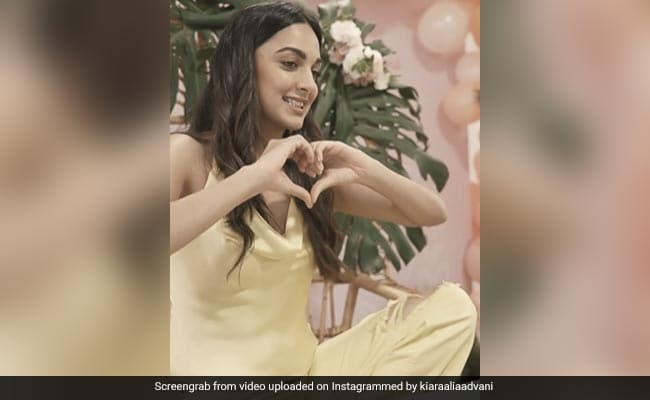 Caption- Kiara Advani in a still from the video. (courtesy: kiaraaliaadvani)

Kiara Advani is one of the most sought-after actresses in the country today. With several hits to her credit, the star enjoys a fan following across languages and film industries. On June 13, the actress who made her debut with the 2014 film Fugly completed eight years in the industry. On the occasion, Kiara Advani penned a heartfelt note on her journey so far. In it, she wrote, “June 13th! The day I stepped into this magical world of filmmaking. 8 years and counting…my rainbows not my thunderstorms. My heart is filled with gratitude.”

The note is attached to a video of her promoting her upcoming film JugJugg Jeeyo with co-star Varun Dhawan. After promotions, Kiara is also seen interacting with her fans over a video call. Explaining how her day went, she said: “My day began with my wonderful team surprising me with a super warm virtual interaction with my fan clubs and ended with Varun Dhawan who turned work into a celebration reminding me why I chose to be a part of this chaotic yet magnetic industry.  I maybe 8 years old today but I have a lifetime of entertaining left to do. #waitforit. I promise to make you proud.”

While the post has received a lot of love from her fans and well-wishers, the sweetest message came from her former co-star Shahid Kapoor. He said, “Congratulations Preeti. Many more to come,” referring to the actress by the name of her character in Kabir Singh, their blockbuster 2019 film.

Varun Dhawan replied to the post with three star emojis.

In addition to the positive buzz around JugJugg Jeeyo, Kiara Advani is also basking in all the love her last release Bhool Bhulaiya 2 is receiving. The film which crossed the 150 crore mark last week, features Kiara alongside Tabu and Kartik Aaryan.

The actress recently also shared a video of her song, Ami Je Tomar from the film and said, “This movie, This song, The love. I can't thank you all enough for continuing to give #BhoolBhulaiyaa2 so much love, Ami Je Tomar always.”

Tagging her team and the cast of Bhool Bhulaiyaa 2, Kiara Advani said, “Thank you to my amazing team. Sabke rooh ko choone waala, Kartik Aaryan, the loveliest Tabu, the three musketeers Rajpal Yadav, Sanjai Mishra, Ashwini Kalsekar and our captain Anees Bazmee sir.  My hit producers Murad Khetani, Bhushan Kumar and the entire cast and crew of BB2. And most important, my darling fans for all their support and love always.”

Given that she is going from strength to strength on the professional front, Kiara Advani even visited the Golden Temple in Amritsar, a few weeks ago, to express her “gratitude.”

In addition to JugJugg Jeeyo, Kiara Advani will be seen in a bunch of interesting projects such as Govinda Naam Mera with Vicky Kaushal and RC15 with Ram Charan.