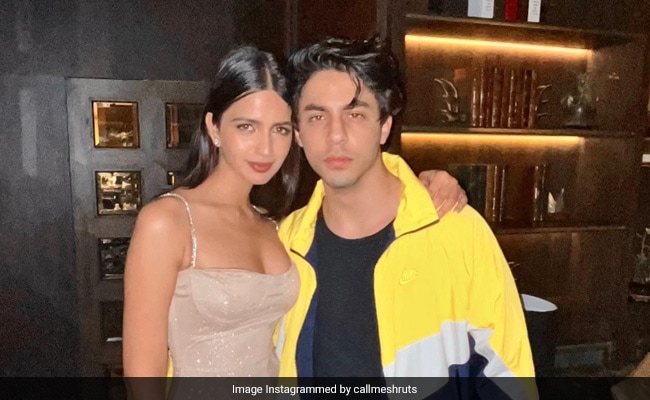 Actor Shruti Chauhan's birthday party was recently attended by a few close friends, among them were Shah Rukh Khan and Gauri Khan's son Aryan, Katrina Kaif's sister Isabelle Kaif, TV star Karan Tacker among others. Shruti Chauhan shared pictures along with other friends on Instagram. In one of the pictures, Shruti can be seen posing with Aryan Khan. Another picture features her posing with Isabelle Kaif and another group of friends. "Happiest of Birthdays," Isabelle Kaif commented on the post. "Happy bday Shruti," commented actor Vijay Varma.

Swipe to see the photos from the party:

Shah Rukh Khan married Gauri Khan in 1991. The star couple are parents to Aryan, 24, (their eldest child), who graduated from University Of South California. Their daughter Suhana will soon make acting debut with Zoya Akhtar's The Archies. SRK and Gauri are also parents to AbRam, who attends school in Mumbai.

Speaking to David Letterman in 2019, Shah Rukh revealed that his son Aryan has no plans of pursuing acting as a career: "Aryan doesn't have what it takes to be an actor and he realises that too but he's a good writer. I think wanting to be an actor has to come from within. Something you really need to do and find a set of skill that helps you do it and learn it. But I think I realised it from him when he said that to me. He came to me and said, 'I don't think I want to act'," Shah Rukh Khan said during the interview.

Just like her sister Katrina Kaif, Isabelle is also an actress. She stared in the 2021 film Time To Dance, opposite Sooraj Pancholi. Isabelle will next be seen in Lalit Butani's Kwatha, which will star Salman Khan's brother-in-law Aayush Sharma.