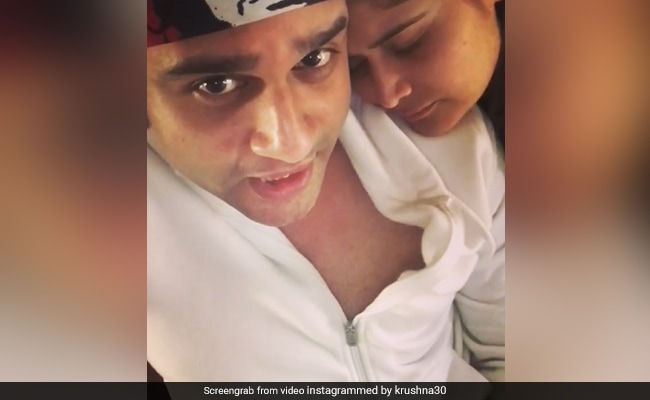 Arti and Krushna in a still from the clip. (Image courtesy: krushna30)

Bigg Boss 13 finalist Arti Singh is taking her time to recover from the show's hangover. The actress, who spent 140 days in the Bigg Boss house with several other contestants and made it to the finale, is out of the house now but she cannot take Bigg Boss out of her (pun indeed). On Wednesday, her actor brother Krushna Abhishek gave us a proof that Arti is still under the Bigg Boss' spell and shared a hilarious clip which will leave you in splits. In the video, Artil can be seen sleeping on her brother's shoulder as he repeatedly asks her to wake up and have her meal. Arti doesn't give a response and continues to rest on his shoulder. Just then, Krushna decides to play a prank and starts mimicking the Bigg Boss' voice to wake her up. When Krushna says: "Bigg Boss chahte hai Arti Khan," she wakes up immediately and realises that he is just messing with her.

Arti Singh was one of the six finalists on Bigg Boss 13, which concluded on February 15 with Sidharth Shukla as its winner. The other finalists who got eliminated in the finale were Paras Chhabra and Rashami Desai. Shehnaz Gill and Asim Riaz made it to the top three. During her stay in the Bigg Boss house, Arti's sister-in-law Kashmira Shah (who married Krushna in 2013) also visited her.

When Arti came out of the Bigg Boss house, Krushna shared an appreciation post for her and wrote: "First meeting with my lovely sister Arti after she came out of the big boss house. You're a winner for us. Didn't think you would go this far. You have earned respect and played with dignity. Love you."

First meeting with my lovely sis Arti after she came out of the big boss house. U r a winner for us didn't think u would go this far u hv earned respect and played with dignity love u #bigboss

On the work front, Arti Singh has featured in a number of TV shows such as Grihasti, Parichay, Devon Ke Dev...Mahadev, Sasural Simar Ka and Udaan.