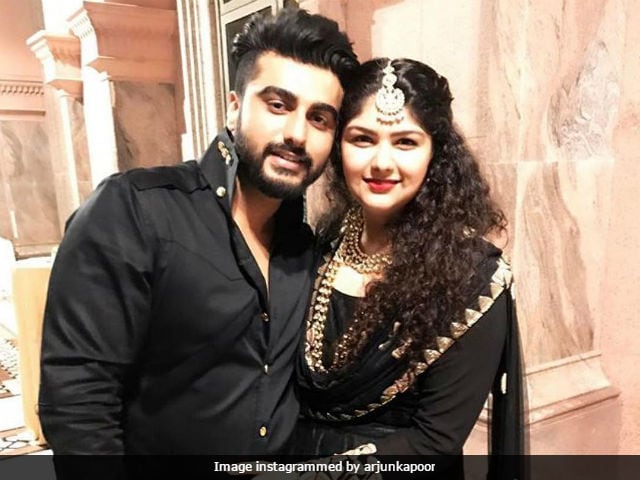 New Delhi: Actor Arjun Kapoor, who is currently busy promoting his film Half Girlfriend, co-starring Shraddha Kapoor, shared a nostalgic picture with his sister Anshula Kapoor on Instagram. The heartwarming throwback picture shared by the 31-year-old actor reads: 'We go together like copy and paste.' In the picture, the brother-sister duo looks absolutely adorable with their mischievous smiles. "The picture says it all !!! Literally !!! @anshulakapoor I am nothing without u n ur quiet support understanding and love(sic)," wrote the Aurangzeb actor. Arjun is the son of producer Boney Kapoor and his first wife, late Mona Shourie Kapoor. He is the nephew of actors Anil Kapoor, Sanjay Kapoor and producer Sandeep Marwah.

See the wonderful picture posted by Arjun Kapoor below:

The picture says it all !!! Literally !!! @anshulakapoor I am nothing without u n ur quiet support understanding and love...

Arjun Kapoor will be seen portraying the role of Madhav Jha in Half Girlfriend. On Monday, the trailer of the film was released by its makers which received mixed reviews on social media. The film, directed by Mohit Suri, is based on Chetan Bhagat's novel of the same name. Half Girlfriend is scheduled to release in theatres on May 19. Arjun and Shraddha Kapoor will be seen sharing the screen space for the first time with this movie.

Promoted
Listen to the latest songs, only on JioSaavn.com
Arjun Kapoor made his acting debut with 2012 movie Ishaqzaade, co-starring Parineeti Chopra. He was last seen in R Balki's Ki and Ka opposite Kareena Kapoor.

After Half Girlfriend, Arjun Kapoor will be seen in Anees Bazmee's Mubarakan. The film, which is scheduled to release in theatres on July 28, also features Anil Kapoor, Ileana D'Cruz and Athiya Shetty in lead roles.