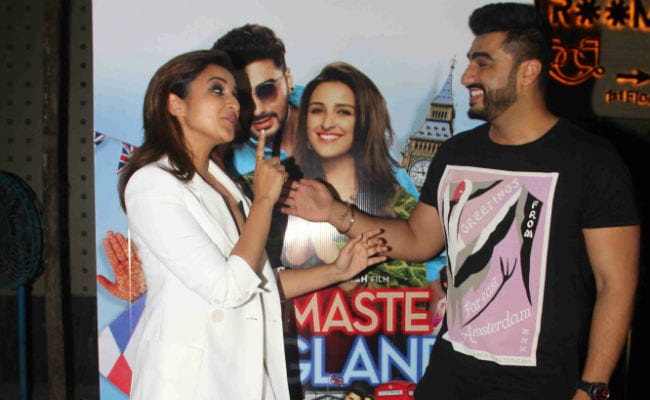 Arjun Kapoor and Parineeti Chopra at a Namaste England event.

New Delhi: Actor Arjun Kapoor shares a good equation with his Namaste England co-star Parineeti Chopra, so much so that he believes that she "brings the best out of him," reports news agency IANS. During the wrap-up party of the film, Arjun interacted with the media and said: "As an actor, Parineeti brings the best out of me because I feel that if you are honest with your co-actor, then automatically, you deliver good results." The 32-year-old actor revealed that he is extremely comfortable in sharing screen space with Parineeti (who he has previously worked with in his debut film Ishaqzaade) and told IANS: "There is not a feeling of fear in me while working with Parineeti as I can tell her to improvise on a certain scene or ask her to do some more retakes together. There is no sense of insecurity among us in terms of outdoing each other. So, you look forward to work with such actors because eventually it helps both the actors to perform a good scene. That is the reason I enjoy working with her."

Arjun Kapoor recalled watching Namaste London with the film's protagonist Katrina Kaif and said that he feels "surreal" to be a part of it. "It's also a strange feeling because sometimes you want to be part of some films and I clearly remember that I watched Namastey London with Katrina Kaif and today I am talking about wrapping shooting of Namaste England. So, it's very surreal in that sense," IANS quoted him as saying.

Though Arjun was busy with the shooting of the film in London, he did manage to take some time out of his schedule and enjoyed with her sister Anshula Kapoor and also joined cousins Sonam Kapoor and Rhea Kapoor.

Take a look at Arjun's pictures from London, here:

Namaste England is a sequel to the 2007 film Namaste London (starring Akshay Kumar and Katrina Kaif). It has been directed by Vipul Amrutlal Shah and is scheduled to release on October 19.

Promoted
Listen to the latest songs, only on JioSaavn.com
Apart from Namaste England, Arjun will be seen in Sandeep Aur Pinky Faraar (also opposite Parineeti Chopra) and Ashutosh Gowarikar's Panipat, alongside Sanjay Dutt and Kriti Sanon. He was last seen in Mubarakan.