"Are You A Monkey?": Karan Johar's Question To Twins Backfires Spectacularly

"Ok I have a new name now," wrote Karan Johar 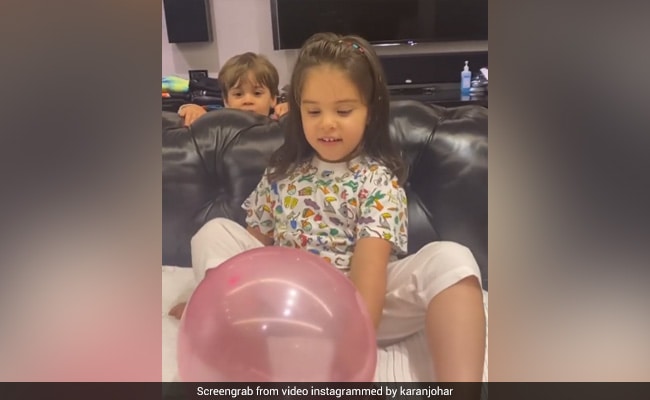 Filmmaker Karan Johar, who is back with the second season of "lockdown with the Johars," never fails to crack up his Instafam with his ROFL videos featuring his kids Yash and Roohi. And looks like, the kids are being brutally honest with their "dada" Karan Johar. On Monday, KJo dropped another hilarious snippet of his quality time with his twins Yash and Roohi and his Instafam can't stop laughing at the outcome. In the video, KJo can be seen talking to Roohi while she plays with a balloon. Then, Yash can be seen joining in, who is referred to as "monkey" by KJo. Reacting to the name, Yash says that he is "Yash bhaiya" and Roohi says that she is "Roohi didi," to which KJo asks them, "Then what am I?" Yash hilariously answers KJo saying that he is the monkey. Sharing the hilarious video, KJo wrote, "Ok I have a new name now." He also added the hashtag "lockdown with the Johars" to his post. Take a look:

Within minutes of posting, KJo's video was flooded with comments from his friends and members of Yash and Roohi's fan club including Bhumi Pednekar, Ekta Kapoor, Maheep Kapoor and others. Reacting to the video, Sussanne Khan wrote, "I am sure, they are the best company to have at this time. Too sweet."

KJo, who is currently at home with his kids Yash and Roohi and his mother Hiroo Johar, keeps giving us the daily dose of laughter and cuteness with his family videos. On Monday, KJo shared a hilarious snippet of her discussion with baby Yash on "cutting hair." "My son has suggested a unique way of cutting hair! Please don't try this at home," wrote KJo. Take a look:

Take a look at the hilarious snippets of KJo's family time with his kids Yash and Roohi:

We started the morning with a dance performance! Watch me being dragged to the dance floor! #lockdownwiththejohars #aankhmarey