Anushka Sharma Has Something To Say About Backlash Over BCCI Pic

"Let's not make a huge hue and cry of a topic with such little substance," said Anushka Sharma 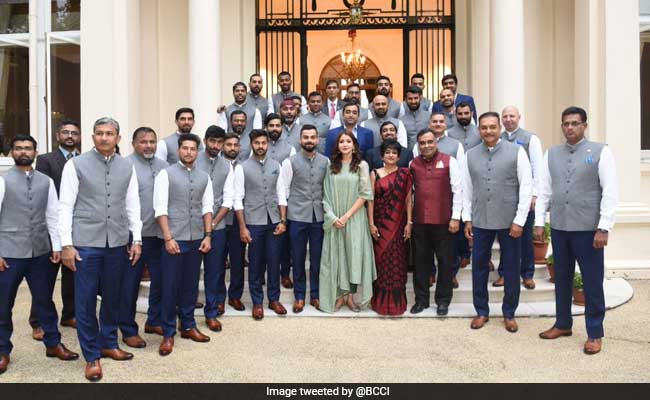 Anushka Sharma recently found herself at the epicentre of massive backlash directed towards BCCI (Board of Control for Cricket in India) after she accompanied her husband Virat Kohli, along with Team India, to a gathering hosted by the High Commission of India in London. Anushka was mercilessly trolled on Twitter for being the "odd one out" in a photo tweeted by BCCI last week, which was responded with silence on Anushka's part until recently, when the 30-year-old actress told news agency ANI: "Whoever had to make a justification on the activity has made it. I feel this was just a trolling activity and I don't react to trolls."

After BCCI tweeted the photo featuring Anushka along with Team India, many on Twitter enquired how the star wife continues to accompany Virat for the Test series as BCCI had barred girlfriends and wives of the Indian players from joining their partners till the Test against England is over. Anushka told ANI that her accompanying Virat and the team to the gathering was well within boundaries of the BCCI directives: "Whatever happened has happened within the guidelines and will always happen in the guidelines and I won't say anything more on this." She also made a plea to not let the issue snowball into an unprecedented controversy: "Let's not make a huge hue and cry of a topic with such little substance."

This is what BCCI had tweeted last week:

#TeamIndia members at the High Commission of India in London. pic.twitter.com/tUhaGkSQfe

And here's a quick look at how Twitter reacted to Anushka's presence in the photo:

She looks odd one out..

@bcci has lost the little credibility it had after posting this picture!

why is anushka sharma there? she's not a part of team india. this isn't acceptable

Why is Anushka here lmao?
She is at the center while the vice captain is at the end lol whatta joke

Why @BCCI allows someones wife at official tour.... Please confirm Is your team mens are at work or on honeymoon

Earlier this year, Anushka was trolled for a viral video tweeted by Virat Kohli, in which she can be seen asking a fellow commuter to not litter on the streets. However, the actress was quickly defended by Virat in another social media post, which slammed the trolls saying: "Lot of people who don't have the courage to do something like this find it funny. Everything for people nowadays is meme content. Shame."

Lot of people who don't have the courage to do something like this find it funny. Everything for people nowadays is meme content. Shame.

Anushka, who dated Virat on and off since 2013 before finally getting married in December last year, was repeatedly blamed and trolled each time Virat underperformed on the pitch in 2015. In March the following year, Anushka was trolled again about Virat's pitch result after India reached the semi-finals of the World T20 championship, when Virat jumped publicly to her defence and posted this tweet, which recorded the highest number of re-tweets in 2016.

On the work front, Anushka Sharma is currently looking forward to the release of Sui Dhaaga, which is all set to hit screens on September 28. She also has Shah Rukh Khan's Zero in the pipeline.