Ankita posted a video on her Instagram timeline wherein she can be seen twirling away in a red anarkali style suit. 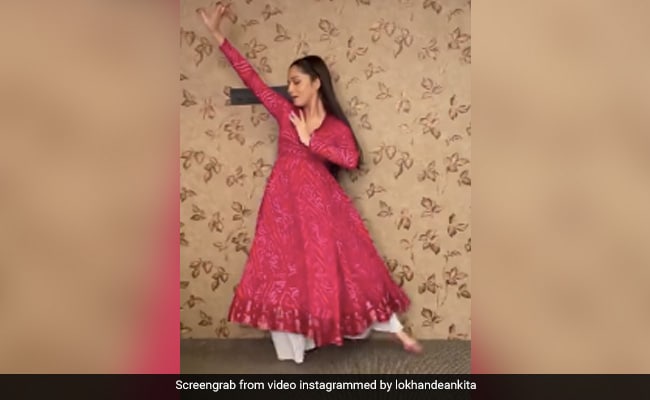 Ankita Lokhande has gracefully taken it upon herself to brighten our day with her dance moves and sunshine smile. Ankita posted a video on her Instagram timeline wherein she can be seen twirling away in a red anarkali style suit. Ankita flaunts her amazing dance skills as she performs on the song Laal Ishq by Arijit Singh from the film Goliyon Ki Raasleela - Ram Leela. In the caption alongside the Instagram Reels, Ankita wrote the lyrics of the song, “Yeh Laal Ishq, Ye Malaal Ishq. (This passionate love, this anguished love)” along with a red heart emoji.

Well, it doesn't stop here. We have another Reels by Anikta Lokhande waiting for you. Here, the actress is channelling her inner dancing diva. For this one, she picked the soulful number Kehna Hi Kya composed by music maestro AR Rahman. This song, featuring, actress Manisha Koirala, is from the film Bombay. In the caption scape, Ankita wrote the lyrics of the song, “Ab kya kare, kya naam le, kaise unhe main pukaru,(Now, what do I do, whose name do I take, how do I call out to him).” The post was an instant hit on the social media platform. Marathi actress Amruta Khanvilkar commented, “You dancing is the best thing.” Along with three heart-eye emojis. Actress Rashmi Desai posted a red heart emoji in the comments section.

Ankita Lokhande often posts videos and pictures of herself on her social media account giving her fans and followers a glimpse into her life. Check out this fun Reels in which Anikta is dancing with her Pavitra Rishta co-star Minal Mogam. Ankita looks super stylish dressed in a black dress with a striped shirt on top. In the caption tagging Minal, she wrote, “Didn't we kill it?” Tell us what you think.

Ankita Lokhande is a popular name in the Hindi television industry. The actress made her television debut with the television show Pavitra Rishta where she played the lead role of Archana along with late actor Sushant Singh Rajput, who portrayed Manav's character. Now, Ankita will be seen reprising her role as Archana in Pavitra Rishta 2 along with television actor Shaheer Sheikh, who will be stepping into the shoes of Sushant. Pavitra Rishta 2 will be produced by Ekta Kapoor's ALTBalaji.