In a video shared by the actress, Ankita Lokhande is seen singing the title track of the show while cutting the cake 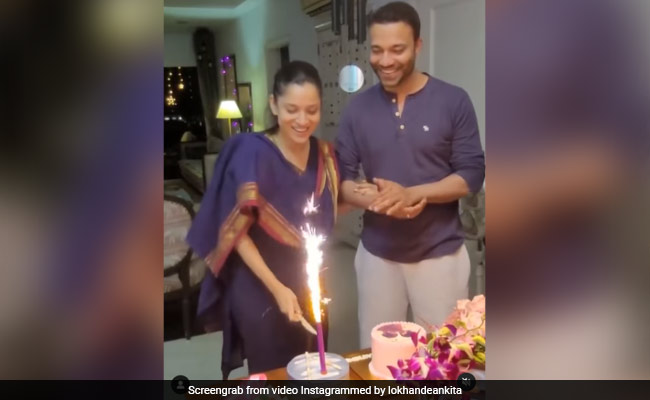 Actress Ankita Lokhande is on cloud nine with all the love and appreciation coming her way, following the release of her web show Pavitra Rishta - It's Never Too Late on September 15. It is based on the 2009 TV serial of the same name and stars Ankita and Shaheer Sheikh as Archana and Manav. The roles were portrayed in the original show by Ankita and the late actor Sushant Singh Rajput. This is a special day for Ankita and she celebrated it with her loved ones. In a video shared on Instagram, the actress is seen standing with her boyfriend, businessman Vicky Jain, as she cuts into a decadent cake. The two also sing the title track of the show. Referring to Vicky Jain as her “real life Manav”, Ankita is seen holding hands with her boyfriend and feeding him a cake.

Sharing the clip, Ankita Lokhande wrote, “15/09/2021. Pavitra Rishta. A day full of love and blessings. Thank you each and everyone for the love, support and appreciation. Grateful.” Fans and followers congratulated the star, while actress Prarthana Behere wrote, “Love you Weedee...Love...love...love to you.”

Previously, Shaheer Sheikh and Ankita Lokhande appeared together in a video in which Ankita confessed to being nervous about how the audience would respond to their attempt at continuing the legacy of the classic show. She added, "I love Pavitra Rishta." Shaheer Sheikh too described the show to be simple, pure and beautiful, urging people to watch it.

In addition to her updates about work, fans also get a peek into Ankita Lokhande's personal life thanks to Instagram. The actress recently shared a lovely montage video of some special moments with Vicky Jain  and wrote, “The best person come unexpectedly.”

We have the happy video here:

With Pavitra Rishta – It's Never Too Late, Ankita Lokhande will be reprising the character that she debuted with; one that turned her into a household favourite. She is also known for her roles in the films Manikarnika: The Queen of Jhansi and Baaghi 3.