"Anything that's not common in a society, people usually like to talk about it," wrote Ankita Konwar 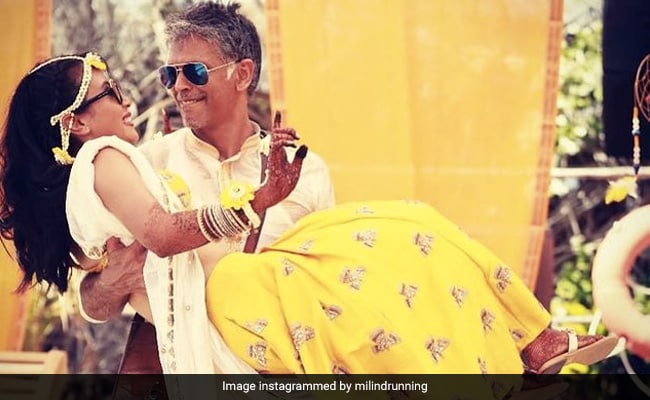 Ankita Konwar, 29, married to actor Milind Soman (55), has addressed the age gap between them on several occasions and the topic, once again popped up during an interactive session with her Instafam. On Wednesday, Ankita was interacting with her Instafam, when a user asked her: "How did you tackle/ manage this Indian stereotype of 'Don't marry an older man'?" Ankita explained that stereotypes are a universal concept and wrote: "Anything that's not common in a society, people usually like to talk about it. And it's not just limited to India. We as a species, have a tendency to get weird about the unknown, the unexplored, AKA fear. A survival skill." She added, "And sometimes we are not conscious enough to distinguish between the utility and the waste of that skill. I have always done what makes me happy."

Milind Soman married Ankita Konwar, also a marathon runner, in a Maharashtrian ceremony in April 2018. A few months after the wedding, the couple exchanged wedding vows in a dreamy "barefoot wedding" in Spain. The Bajirao Mastani actor was earlier married to actress Mylene Jampanoi, whom he had met on the sets of the 2006 film Valley Of Flowers.

In terms of work, Milind Soman  was last seen in the web-series Paurashpur. He also featured in the second season of Amazon Prime's web-series Four More Shots Please! He became a household name after featuring in Alisha Chinai's 1995 music video Made In India. Milind has featured in films like Chef, Bajirao Mastani and 16th December among many others. Milind is also a supermodel, a marathon runner and now an author.