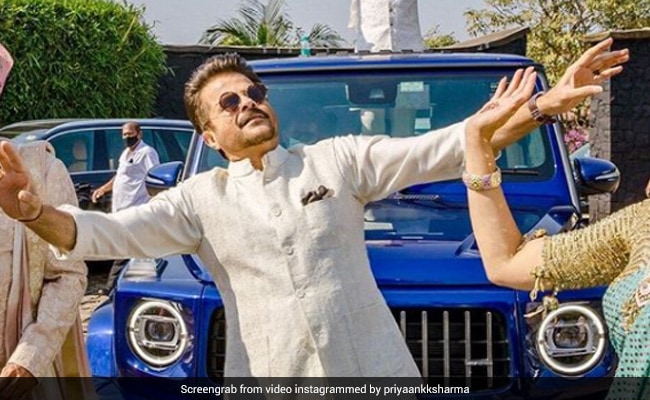 Pictures from Shaza Morani's and Priyaank Sharma's Maldives wedding keep getting better and better. Besides the couple's family members, Bollywood veterans Anil Kapoor and Jackie Shroff also attended the wedding. On Thursday afternoon, Priyaank Sharma shared a chunk of memories from his beach wedding in Maldives. The pictures largely have scenes from his baraat ceremony. In one of the photographs, Anil Kapoor can be seen dancing with all his heart. Anil Kapoor picked a white outfit for the occasion. Anil Kapoor and the groom's mother Padmini Kolhapure are co-stars of films like Woh 7 Din and Pyar Kiya Hai Pyar Karenge.

On Wednesday night, Priyaank shared pictures from the baraat, which features pictures of the bride Shaza Morani  (who crashed the ceremony), Priyaank's cousins Shraddha and Siddhanth dancing. He captioned the post: "Ladkewale #baarat. The one where Shaza Morani crashes. Excitement levels - see tags."

Before their grand Maldives wedding, Priyaank Sharma and Shaza Morani had a court marriage in February this year. The Maldives wedding hosted earlier this month was a grand affair, attended by Priyaank's cousins Shraddha Kapoor and Siddhanth. Priyaank is the son of veteran actress Padmini Kolhapure and film producer Pradeep Sharma. Shaza Morani is the daughter of film producer Karim Morani.