Anil Kapoor And Arjun Kapoor Dance To My Name Is Lakhan And It Is Jhakaas. Seen Yet? 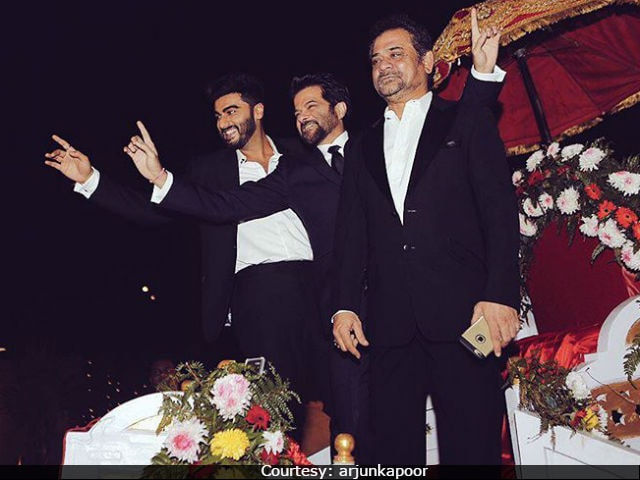 Anil Kapoor and Arjun Kapoor during the launch of their film Mubarakan (Courtesy: arjunkapoor )

New Delhi: It was a big fat wedding for the Kapoors' in Abu Dhabi. From Anil Kapoor to Sridevi to Arjun Kapoor to Jhanvi Kapoor, the entire Kapoor Khandaan had rocked the wedding of Akshay Marwah, Arjun and Sonam Kapoor's cousin and the pictures that were shared on social media by them are a proof of that. So far, only Sridevi and his daughters Jhanvi, 19, and Khushi Kapoor, 17, made headlines for their royal appearance at the wedding ceremony. However, we now came across a video of Anil Kapoor and Arjun Kapoor, shared by a fan club on Instagram, from inside the ceremony, purportedly from sangeet, where the chacha-bhatija duo have set the stage on fire as they dance to Anil's song My Name Is Lakhan from the 1989 film Ram Lakhan. And it's totally Jhakaas.

In the video, we also see Sonam Kapoor shaking a leg with her father and cousin. But, she soon shifts to another side of the stage to invite more people to join them on the dance floor. And, meanwhile Anil and Arjun managed to grab the limelight. In another video, Sonam is seen dancing with Arjun and cousin Mohit Marwah on the song Tune Maari Entriyaan.

Arjun seemed to be unstoppable. He also matched his steps with his gang of brothers on Saturday Saturday. He danced with Sanjay Kapoor's son Jahaan Kapoor.

Here's the video on the 'bro-code:'

#Repost @yashrajfilmstalent with @repostappThese cousin's be too cool yo! @arjunkapoor with his cousin Jahaan Kapoor have got some serious dance moves on the dance floor #Dubai #FamJam

Meanwhile, amidst all the naach gaana, Sonam Kapoor wrote a heartwarming message for her brother Akshay Marwah, her bua Reema's son.

Dear @akshaymarwah22 I love you bhai, you are a lucky soul to understand the meaning and need for a partner to share all your ups and downs of life with. Life is so much better when you have someone who loves you and who you can love in return. I'm so proud of you that you had the courage to choose that. I was moved to tears with the joy and expectation I saw on your face when the baraat moved towards the mandap. @aashitarelan16 is one lucky girl. I hope your journey forward is beautiful and filled with life! I love you both. #akmash #bhaikishaadi

Sridevi and her daughters were the stars of the wedding as they carried themselves with grace in ace designer Manish Malhotra's couture.

Check out these pictures:

Welcome to the family Aashita