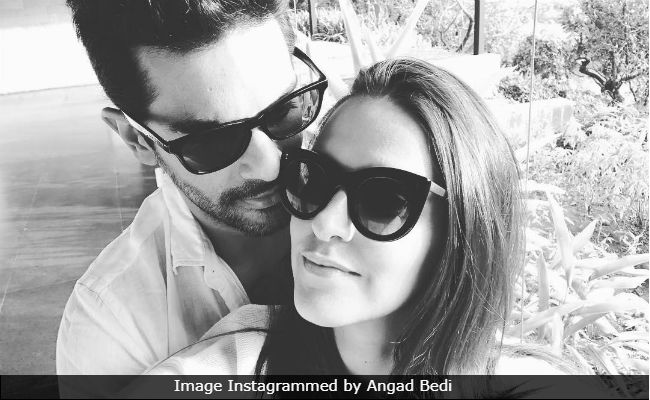 New Delhi: Angad Bedi and Neha Dhupia are celebrating their one month wedding anniversary and on their special occasion both the actors shared pictures with beautiful heart-felt messages on social media and we must say, we have already picked our favourite. It was Angad Bedi's goofy caption that won our hearts. The 35-year-old actor addressed Neha as "wifey" and wrote: "Been a month...wifey you got good taste I must say." Neha, on the other shared a picture from their mehendi ceremony and wrote: "One month down ... forever to go ... love you." The couple's fans wished them many years of togetherness in the comments section.

Been a month.. @nehadhupia wifey you got good taste I must say

Neha Dhupia and Angad Bedi had a hush-hush wedding on May 10 at a gurudwara in Delhi and decided to share the big news with their fans on social media. "Best decision of my life. Today, I married my best friend. Hello there, husband, Angad Bedi," tweeted Neha while Angad wrote, "Best friend, now wife. Well, hello there, Mrs Bedi."

The couple is reportedly planning to host a lavish reception in July. "We are hoping to host a reception in the first week of July. Shaadi toh kar li, but we have to go reverse now. I want my close friends to be there. Right now, all of them are busy. Nehra (cricketer Ashish Nehra)is not in town. From the film industry, I want Mr Bachchan (Amitabh Bachchan) and Salman (actor Salman Khan) bhai to be there, and they are both caught up right now," mid-day quoted Angad as saying.

Angad Bedi has featured in films such as F.A.L.T.U, Ungli, PINK, Dear Zindagi and Tiger Zinda Hai, co-starring Salman Khan. He will next be seen in Soorma, co-starring Diljit Dosnajh and Taapsee Pannu.