Angad Bedi Couldn't Watch Dia Mirza's Thappad, So Here's What The Actress Did

"I have heard and read some really awesome reviews. Shall watch it soon", wrote Angad 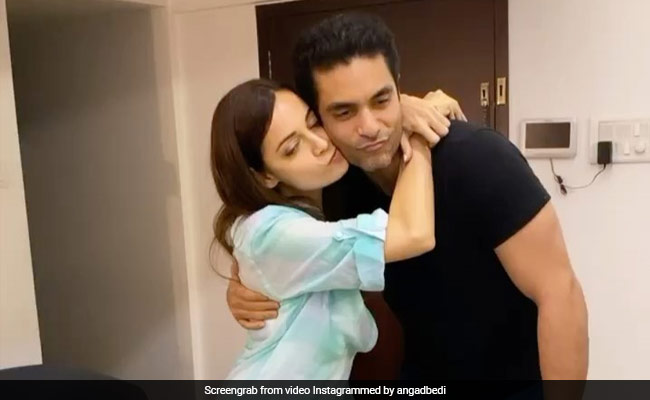 Angad Bedi who couldn't make it to Taapsee Pannu and Dia Mirza's upcoming movie Thappad screening due to his knee injury was visited by Dia Mirza. Angad shared a snippet from their meeting on his Instagram profile on Thursday and wrote, "Thank you for coming Dia Mirza and all the very best for Thappad. I have heard and read some really awesome reviews. Shall watch it soon. Best of luck." Dia Mirza hasn't commented on his post but we would love to see her reaction.

Thank you for coming D!!! @diamirzaofficial and all the very best for #thappad i have heard and read some really awesome reviews. Shall watch it soon. Best of luck #dadisa #dadasahebphalkeaward

The actor got injured last month while shooting for his upcoming web-series MumBhai in Mumbai's Mazagon Dock area and had to undergo a knee surgery. A few days ago, he posted a video on his Instagram profile recorded by his actress-wife Neha Dhupia in the hospital "minutes before the surgery" as he rested on a hospital gurney.

That's me minutes before going in for a knee surgery... I think my nerves got me talking too much... captured by my wifey ( also pls note she has no clue which knee is injured ) but I still love her too much ... stay tuned for more ... will keep u posted with more videoes if I'm not dying in pain ... #AngadsKneedy #Vlog1

Earlier, Angad shared this adorable boomerang on his Instagram profile where he can be seen touching feet with his one-and-half-year old daughter Mehr while balancing with a walker.

On the work front, Angad Bedi was last seen in the 2019 movie The Zoya Factor, where he shared screen space with Sonam Kapoor and Dulquer Salmaan. The F.A.L.T.U actor will be next seen in the biopic Gunjan Saxena: The Kargil Girl which stars Janhvi Kapoor in the titular role. The film is slated to release on March 13.