"It's true that Ahaan Panday and Ajay Devgn will be seen together. Ajay plays the antagonist in this film that promises to be a visually grand and exciting affair," revealed a source 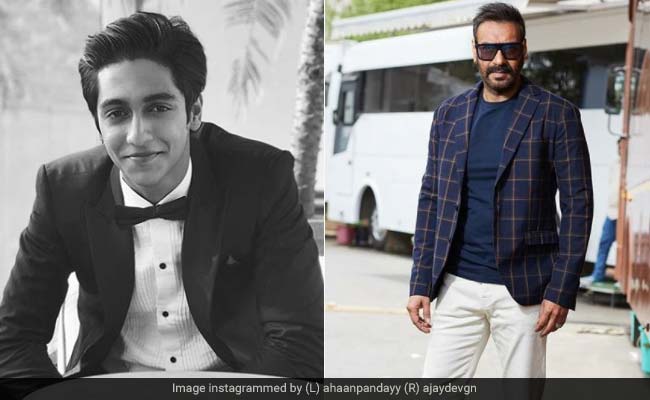 Ananya Panday's cousin Ahaan Panday will reportedly make his Bollywood debut alongside actor Ajay Devgn. Yes, you read it right. According to a Bollywood Hungama report, Yash Raj Films has signed Ahaan Panday in a superhero franchise, in which Ajay Devgn will play an antagonist. The film, which will mark Ajay's first project with YRF, will reportedly be directed by debutant Shiv Rawail. Talking about the film, a source close to the development told the publication: "It's true that Ahaan Panday and Ajay Devgn will be seen together. Ajay plays the antagonist in this film that promises to be a visually grand and exciting affair. It'll be a part of a superhero series and every part will have a new villain. In the first instalment, it's Ajay who will play the baddie."

Ajay Devgn and Ahaan Panday's new film will reportedly be "an expensive" project. "It is rare for a debutant to bag such an expensive film as his launch vehicle. However, Aditya Chopra has full faith in Ahaan's talent and is sure that he'll do justice. Also, he has placed his trust in debutant director Shiv Rawail and is confident that he'll be able to pull off the challenging project. Moreover, the presence of Ajay Devgn will also add to the hype," added the source, reported Bollywood Hungama.

Ahaan Panday is the son of actor Chunky Panday's brother Chikki and fitness expert Deanne. He made his ramp debut for designer Nandita Mahtani at her fashion show in 2016. Ahaan's sister Alanna is also a model.

Last year, Ahaan's cousin Ananya Panday made her film debut with Student Of The Year 2. Post that, she featured alongside Kartik Aaryan and Bhumi Pednekar in 2019's Pati Patni Aur Woh. Ananya's upcoming film is Khaali Peeli, a teaser of which released on social media on Monday. The actress will share screen space with Ishaan Khatter in the film.

Ajay Devgn, on the other hand, has a couple of films lined up such as Maidaan, Sooryavanshi and Bhuj: The Pride Of India.