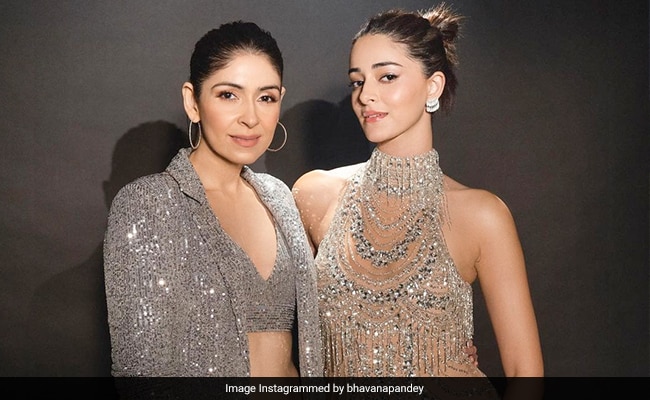 Filmmaker Karan Johar's 50th birthday bash may very well be last week's news, but the stars who attended the party seem to still be reeling under all the glamour of the glitzy night. A case in point is Fabulous Lives of Bollywood Wives star Bhavana Pandey who, on Monday, shared a picture from the star-studded celebration. In the image, she is not alone but with her daughter, actress Ananya Panday. The mother-daughter duo is dressed in their most sparkly outfits for the party which ran with the theme “bling”. While Bhavana is dressed in a silver sequin power suit, Ananya is seen in a nude, figure-hugging dress with loads of embellishments. In the caption, Bhavana said, “All things bling.”

Over the weekend, Bhavana Pandey had also shared a set of solo pictures from the party and dropped a bunch of diamond and star emojis in the caption. Reacting to the post, fashion designer and Queer Eye star Tan France wrote, “You look so good.” Malaika Arora said, “You looked stunning, Bhavs.”

When Bhavana Pandey is not taking Instagram by storm with her glamorous images, she is busy being the perfect mom to her daughters. On Sunday, Bhavana shared an image and a video from her younger daughter, Rysa Panday's graduation ceremony. In the caption, Bhavana said, “My baby girl. All grown up and a graduate now. Proud of you. Shine on,” with a bunch of heart emojis.

On the work front, Bhavana Pandey will be seen in the second season of the Netflix show, Fabulous Lives of Bollywood Wives.