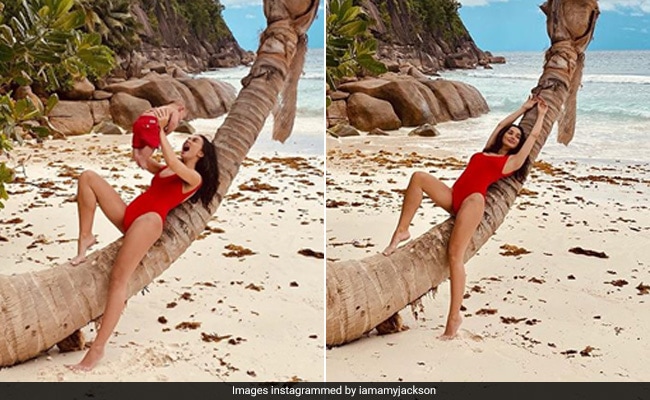 Amy Jackson, whose Instagram bio starts with the words "AJP's mum", shared a glimpse of her mom-life in a "real life vs Insta life" post and we can't even... Amy Jackson's Instagram post is an album of two photos, in the first of which she adorable poses with son almost-9-month-old son Andreas Jax Panayiotou. In the second photo, Amy Jackson poses like a bona-fide model, as if for a calendar shoot. If we do a spot the difference, Amy Jackson minus Baby Andreas will perhaps be the only thing to spot. Amy added this ROFL disclaimer to her post "And no, I didn't just chuck AP into the sea." A beautiful seascape, white sands and a coconut tree form the backdrop of the photo. PS - Amy Jackson is gorgeous as ever in her Baywatch-like scarlet swimsuit.

real life VS insta life (and no, I didn't just chuck AP into the sea )

She also shared this BTS shot of herself and the very adorable Andreas. Looks like Amy and fiance George Panayiotou are holidaying in Seychelles in East Africa. The couple got engaged in January last year and hosted an engagement party later in May. 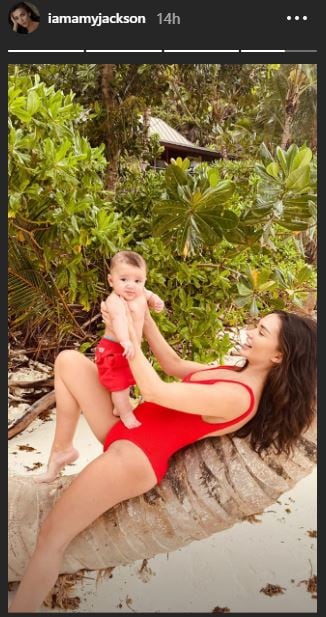 Amy said it's a "bare essentials kinda week". She also posted cute photos of Andreas with fun captions: "Mum, get the Pina Coladas in, will ya."

Mum, get the Pina Coladas in will ya #VacayMode

Amy Jackson made her acting debut with 2010 Tamil movie Madrasapattinam and has featured in several Telugu and Kannada projects. Singh Is Bliing and Freaky Ali are some of the Bollywood movies she's starred in. Amy was last seen in Rajinikanth's robot drama 2.0, co-starring Akshay Kumar, with whom she's shared screen space before.