As per CBFC's official website, an intimate scene featuring Sara and Kartik was "modified" among other edits 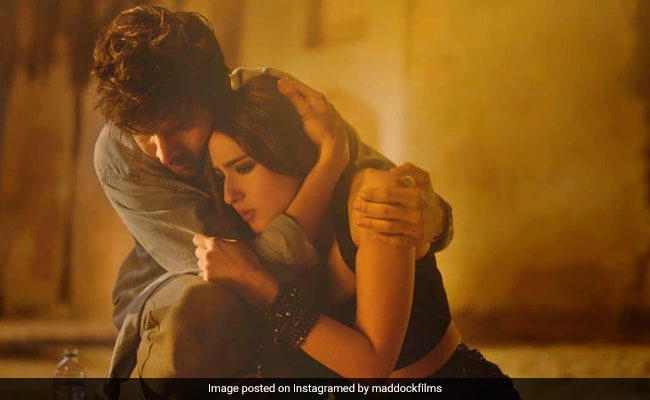 Sara Ali Khan and Kartik Aaryan's upcoming film Love Aaj Kal is trending again because the Internet fished out the changes and edits made by the Central Board Of Film Certification (CBFC). The Censor Board, which assigned a 'U/A' certification to Love Aaj Kal, made multiple edits, details of which are available on CBFC's official website. As per the CBFC website, the film body, known for being overtly sanskaari, "reduced" a kissing scene featuring Sara and Kartik to a mere "flash", "modified an intimate scene", "blurred/defocused" certain visuals following the intimate scene and "removed the scene of actors (Sara and Kartik) undressing themselves." The Censor Board also muted a few cuss words and replaced one with an alternative in Love Aaj Kal, among other changes.

Directed by Imtiaz Ali, Love Aaj Kal features two love stories with Kartik Aaryan being the common actor in both. He co-stars with Sara Ali Khan in the story set in 2020, which is a fresh take on modern day romance. Kartik shares screen space with actress Arushi Sharma in the love story of the Nineties.

The Censor Board has a reputation for suggesting edits and changes, often deemed as outrageous by the makers and also cine-buffs. Last year, Alia Bhatt and Ranveer Singh's Gully Boy reportedly altered a 13-second kissing scene in the final cut of the movie. Instead of the close-up, the final version has a wider shot. CBFC also edited out scenes featuring a politician from Hrithik Roshan's Super 30 and also changed a reference to The Ramayana. In 2018, the CBFC suggested replacements for cuss words for Veere Di Wedding instead of muting them, in a first time move.

Love Aaj Kal is all set to hit screens on Valentine's Day.