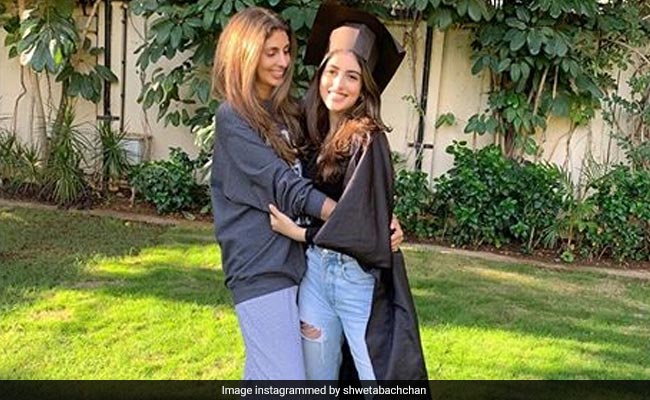 Shweta Bachchan's daughter Navya Naveli Nanda, who graduated from New York's Fordham University on May 6, participated in a virtual graduation ceremony, hosted by her university, from home over the weekend. Navya's grandfather Amitabh Bachchan shared details of Navya's graduation ceremony in a blog post dated May 16-17 and wrote: "The graduation ceremony conducted formally in New York in the college premises tonight our time was the moment of the day. Broadcast on a TV link, it gathered the entire family together as Navya's name was read out to celebratory cheer and celebration. Family that was in different parts of the world were all simultaneously connected and never was it felt that we were hundreds of miles apart... it became a moment of great achievement for the girl in the house."

Reminiscing Navya's journey from a "little one" to her graduation day, Big B write: "Emotions ran high as brothers, sisters, mothers, fathers, grandfathers and grandmothers, cousins and aunts, all toasted to the little one, who was just born the other day here in this very house as a baby in a cot. Time has flown by, this one perhaps more speedily than any other."

On the day of Navya's graduation earlier, Navya was treated to a "DIY" version of a graduation ceremony at the Bachchans' Mumbai residence Jalsa. "Class of 2020 - Navya finished college today and since she and everyone else graduating this year won't get a ceremony we decided to DIY one," wrote Shweta, sharing photos of the graduation ceremony in the garden.

Class of 2020 - Navya finished college today and since she and everyone else graduating this year won't get a ceremony we decided to DIY one. With a chart paper cap and a gown hand stitched from scraps of black tenting. I threw on a Fordham ( her college ) sweatshirt over my PJ's!! Congratulations baby I love you and am proud of you! Go forth and conquer x ( I'm not crying you're crying)

"So proud of you Navya... god bless... such positive and happy attitude," Big B had congratulated Navya with this message while Abhishek had written: "God bless you! Can't wait to see what you have in store for the world."

Grand daughter Navya .. the most important day in the life of a young student - Graduation Day .. ! She graduated from College in New York, but ceremony and presence got cancelled because of Corona and lockdown .. she could not go .. we too had all planned to be with her on this important occasion .. BUT .. she though wanted to wear that Graduation gown and Cap .. so staff stitched her an impromptu gown and cap .. and she wore it and celebrated at home in Jalsa .. So proud of you NAVYA .. god bless .. such a positive and happy attitude .. LOVE YOU

Congratulations my Navya on your graduation! Although due to the lockdown you were not able to celebrate it at your university with your classmates and the home garden had to suffice.... Seems like yesterday that we were moving you into your dorm room as a freshman... Wait, strike that. Not "we", "I"!! (You always managed to make Mamu do the heavy lifting ). God bless you! Can't wait to see what you have in store for the world.

Navya Naveli Nanda was classmates with Shah Rukh Khan's son Aryan Khan at Sevenoaks School in London's Kent. Their batch passed out from school in 2016.