Have you seen Navya Naveli Nanda's new photo from the recent photoshoot? 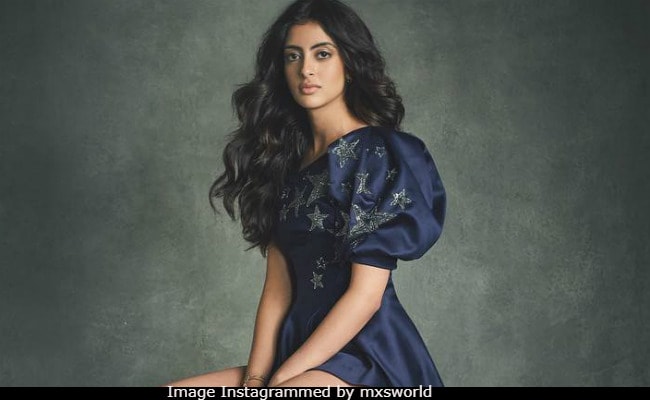 Have you seen Navya Naveli Nanda's new photo from the recent photoshoot for Shweta Bachchan Nanda's new label in collaboration with designer Monisha Jaising? Amitabh Bachchan absolutely loved it and reviewed Navya's new venture as a model like this: "Pride and love... this keeps getting better and better... love you." In the photo, Navya sports a Galileo top as paired with blue shorts from the label's fresh collection. Big B had also tweeted more photos from the photoshoot earlier and for one featuring the mother-daughter duo in a basketball-jersey inspired collection, Mr Bachchan wrote: "Keep adding to my pride. My love and admiration for the daughter and granddaughter!"

pride and love .. this keeps getting better and better .. love you .. https://t.co/4JYWmydBLM

my love and admiration for the daughter and granddaughter .. !! pic.twitter.com/lwcRpWPW8X

Amitabh Bachchan tweeted as "a very proud Father and Nana" when he shared this:

T 2899 - it's Daughter & Daughter UNLIMITED .. the @mxsworld a very proud Father and Nana .. my love and blessings ever unlimited href="https://t.co/oIwPEqFMR5">pic.twitter.com/oIwPEqFMR5

Meanwhile, this is what Abhishek Bachchan had to say about Shweta's new venture and Navya as the "stunning model."

Full power @mxsworld!
The sister's new venture and the niece as the stunning model. Congratulations #MonishaxShwetahttps://t.co/TAQNmwMOhB

However, Karan Johar found himself at the receiving end of massive criticism after he posted photos of Shweta and Navya from the photoshoot. Karan, who has launched several star kids in Bollywood, was brutally trolled for appearing to encouraging nepotism yet again.

When a supremely talented designer and a fashion forward force collaborate the result is magical and beyond chic! @monishajaising and @shwetabachchan bring the new label in town MxS f/w 2018. @mxsworld ! PS.. don't miss the teenage fashionista in the frame! #navyananda !

Shweta Bachchan Nanda recently made her acting debut starring in an advertisement with Amitabh Bachchan for a jewellery brand, which was however, taken down after massive criticism from the banking sector.

Amitabh Bachchan is currently busy with his Brahmastra diaries - the upcoming film directed by Ayan Mukerji and starring Ranbir Kapoor and Alia Bhatt. Big B also has Aamir Khan's Thugs Of Hindostan in the line-up.