Janmashtami 2022: Amitabh Bachchan And Son Abhishek Broke The Dahi Handi In These Films 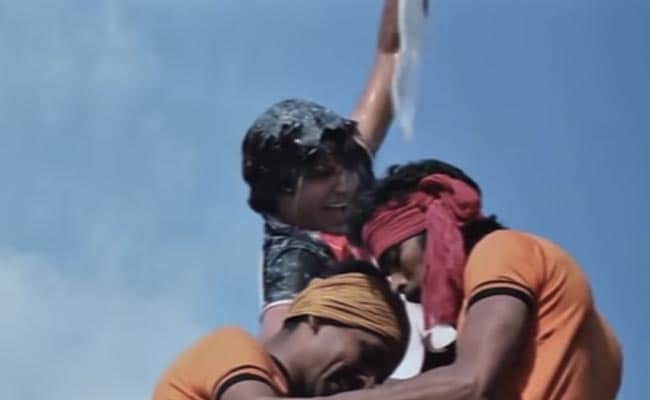 A still from the video. (courtesy: amitabhbachchan)

Amitabh Bachchan's Instagram game is the strongest in the business and there are no two ways about this. Now, on the occasion of Janmashtami, the actor has shared a video edited to include a scene from one of his movies, Khuddaar. The clip is from the song Mach Gaya Shor Sari Nagri Re and features Big B's character leading the dahi handi ritual. That's not all. The clip also contains another similar scene but this time featuring Abhishek Bachchan from the film Happy New Year. Along with the fun video, Amitabh Bachchan said, “Aala re aala Govinda aala.”

Replying to the clip, Amitabh Bachchan's daughter Shweta Bachchan tagged brother Abhishek and said, “Oh AB, you made me laugh so much in this."  Actor Maniesh Paul dropped clap emojis.

Amitabh Bachchan also often shares photos and videos dedicated to him by his fans. A case in point is a recent post by Big B that featured a photo edited to place a still of Amitabh Bachchan on a cracked phone. In the caption, the superstar said, “The creative artwork and mastery of a fan...simply amazing.”

A week ago, Amitabh Bachchan also dropped a poster of his upcoming film Uunchai. In the caption, he said, “Celebrate Friendship Day with the first visual of our upcoming Rajshri film Uunchai. Join me, Anupam Kher and Boman Irani on a journey that celebrates friendship. A film by Rajshri Films and Sooraj Barjatya, Uunchai will be in a theatre near you on 11.11.22.”

On the work front, Amitabh Bachchan will be seen in the soon-to-be-released magnum opus Brahmastra with Ranbir Kapoor and Alia Bhatt.