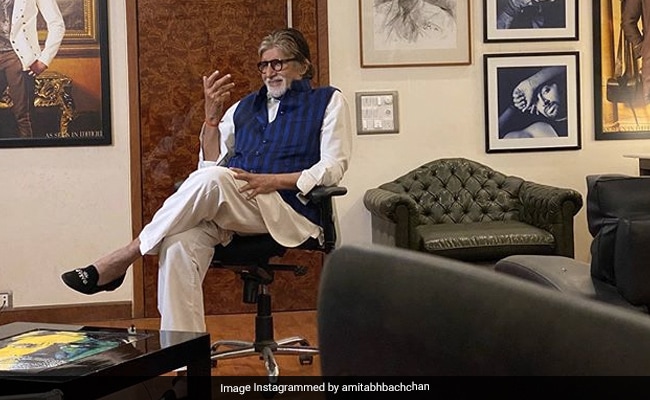 Despite the criticism he received for it, Amitabh Bachchan repeated the Hindi slur he first used against a troll who said he hoped the actor "died of COVID" in a second blog entry. Big B, 77, came home from Nanavati Hospital over the weekend after three weeks of being treated for the coronavirus (his son Abhishek is still in hospital). While in Nanavati, Big B had shared posts praising the medical staff; he also wrote the aforementioned blog post about the troll, ending with a death threat expressed in an uncouth colloquialism. Amitabh Bachchan's latest blog entry combines both.

A comment left on Amitabh Bachchan's homecoming Facebook post shared the writer's story of how her father was allegedly misdiagnosed by Nanavati Hospital - she accused Big B of promoting the hospital, adding that she had "totally lost respect" for Amitabh Bachchan.

Big B shared a screenshot of the exchange he had with his aggrieved fan. "This I shall humbly disagree with. No... I do not advertise for the Hospital, I want to thank them for the care and treatment that I got from Nanavati. I shall and have done it for every hospital that I have been admitted to and shall continue to do so with great respect! You may have lost respect for me but let me tell you, I shall never lose respect for the medical profession and the doctors of my country. And one last thing... my respect and respectability is not going to be judged by you," Amitabh Bachchan.

If Big B had stopped there, it would have been an exemplary response. He didn't. To another comment in which his shout-out for an Amul tribute was also accused of being promotional, Amitabh Bachchan wrote, "When you don't know the truth, then keep your clean mouth clean." He didn't take his own advice though - in his post, Big B has used the Hindi cuss phrase twice to describe both comments. "T**k do express chugs along," he wrote about the first; "the times of 't**k do' seem to have born fruit," Big B wrote, referring to the second.

Last week, when Amitabh Bachchan was still in the hospital, he revealed that he had received messages from haters saying he should die of the coronavirus. In his blog response, Big B threatened to unleash his 'EF' or 'extended family' of 90+ million fans and turn them into an 'extermination family' to whom he would give the Hindi slur of above as a command.

Amitabh Bachchan returned home from hospital on August 2 after testing negative for the virus. Big B and his son Abhishek were admitted to Mumbai's Nanavati Hospital on July 11 after their coronavirus diagnosis - Abhishek remains in the hospital's isolation ward as he is still COVID-19 positive. Abhishek's wife Aishwarya was also briefly in the hospital and returned home on July 27. Amitabh Bachchan's wife Jaya Bachchan tested negative.