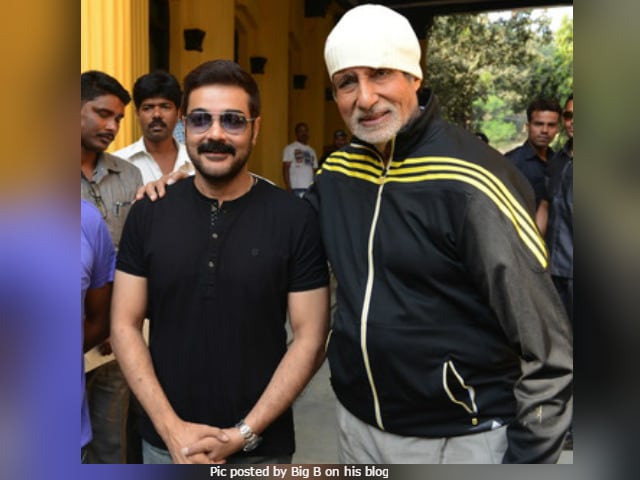 New Delhi: It's not everyone who gets an endorsement from Amitabh Bachchan, much less be described as a 'superstar' by him, India's uber celebrity. Bengali actor Prosenjit had that honour on Monday morning - what a way to begin the week - when Mr Bachchan tweeted a link to the trailer of Prosenjit's new film Yeti Obhijaan. "Prosenjit, superstar from Bengal. Interesting film. Watch," tweeted Amitabh Bachchan, 74. "Thanks a lot, sir. Lots of respect," responded Prosenjit, who co-starred with the senior star's daughter-in-law Aishwarya Rai Bachchan in acclaimed 2003 film Chokher Bali. Read their exchange on Twitter:

Thanks a lot sir. Lots of respect https://t.co/fQIhxv1f3v

Yeti Obhijaan, as the title suggests, involves a search for the legendary beast of the Himalayas. Directed by Srijit Mukherjee - known to Bollywood audiences for making Begum Jaan recently - the film is the second in a series based on the character of Kakababu from Bengali novels by author Sunil Gangopadhyay. Prosenjit is cast against type in the distinctly unglamorous role of Kakababu, an intrepid senior citizen much in demand as a solver of impossible crimes.

Promoted
Listen to the latest songs, only on JioSaavn.com
Yeti Obhijaan, partly filmed in Switzerland, also stars Jisshu Sengupta and will release on September 22.

Prosenjit, son of actor Biswajit, has an extensive list of film credits. After a predominantly mainstream career through the 80s and 90s, the 54-year-old actor was cast in acclaimed films such as Chokher Bali and, subsequently, Shob Choritro Kalponik, Noukadubi and Autograph. He played Anthony Firinghee in Srijit Mukherjee's 2014 film Jaatishwar. He has also appeared in a handful of Hindi films, including the Dibakar Banerjee-made Shanghai.