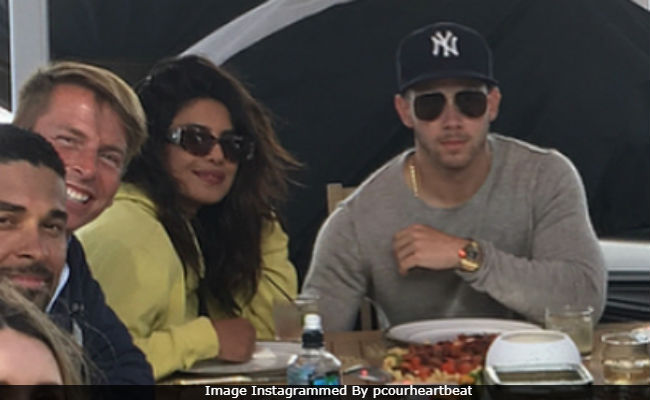 New Delhi: We don't know whether Bollywood actress Priyanka Chopra, 35, and American singer-songwriter Nick Jonas, 25, are dating or not, but sure enough, the rumoured couple closely follow each other on Instagram. (We have proof). Amid the dating rumours, they continue to comment on each other's post and have been trending on and off. This time, Priyanka and Nick were spotted on the trends list for the actresses' comment on his recently-posted Instagram video, from his visit to Australia's Taronga Zoo. In the video, he shares the frame with a koala bear and captioned the video as, "Hi." In her response, Priyanka liked the video and commented, "Who is cuter? Lol." Priyanka's comment has yet again sparked their dating rumours and the Internet's debating over the duo's relationship status.

Over the weekend, Nick and Priyanka's comments on each other's picture kept the Internet busy.

They were spotted in Los Angeles together again.

Priyanka and Nick's dating rumours began after pictures of them chilling at a yacht party with friends went crazy viral. "Priyanka Chopra and Nick Jonas, are they dating?" is how the Internet reacted to their viral pictures.

priyanka with nick Jonas and others ??? in Los Angeles #priyankachopra #nickjonas

Another viral video of them entering the Dodgers Stadium in Los Angeles for a basketball match added more to the speculation.

@priyankachopra and @nickjonas at the #Dodgers game today. pic.twitter.com/3J91P9phzq

Priyanka Chopra currently features in the third season of her American TV show Quantico. The actress was recently criticized heavily for the show's plot. Priyanka made her Hollywood debut last year with Baywatch and A Kid Like Jake and Isn't It Romantic? are her upcoming projects. Salman Khan's Bharat is her next Hindi film.
Comments
priyanka chopra nick jonaspriyanka chopra pics