Priyanka Chopra And Nick Jonas' Pics Trend. 'Are They Dating,' Asks The Internet 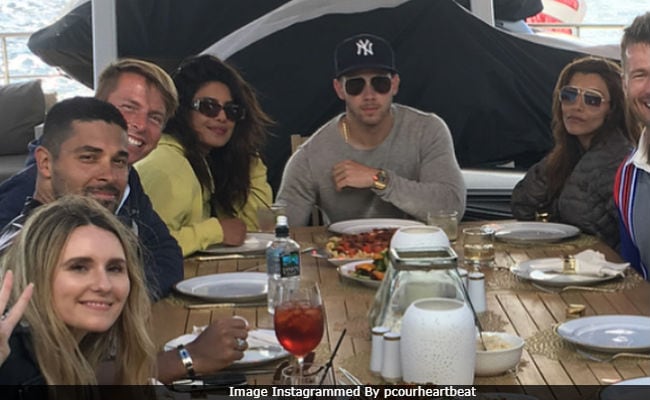 New Delhi: "Priyanka Chopra and Nick Jonas, are they dating?" read a comment on their pictures, which are trending big time today. The pictures have reportedly been taken during their outing in Los Angeles. Both Priyanka and Nick are seen sitting next to each other and are accompanied by several other friends. The Internet has chanced upon two pictures of the stars - one appears to be taken during a group lunch and in the other they are enjoying a boat ride. "Seems they are dating" is what one section of the people think while the others have declared that the duo are surely in dating. "They're looking so cute together," read another comment.

priyanka with nick Jonas and others ??? in Los Angeles #priyankachopra #nickjonas

Priyanka Chopra, 35, is a Bollywood star and is currently busy with her Hollywood projects while Nick Jonas, 25, is an American singer-songwriter.

Another video of them, where the duo are seen entering Los Angeles' Dodgers Stadium to watch a baseball match, has also surface online.

@priyankachopra and @nickjonas at the #Dodgers game today. pic.twitter.com/3J91P9phzq

Promoted
Listen to the latest songs, only on JioSaavn.com
Priyanka and Nick met at last year's Met Gala event and had also posed together on the red carpet. He had posted two pictures of Priyanka from the Met Gala.

On the work front, Priyanka Chopra is busy with her Hollywood projects - A Kid Like Jake and Isn't It Romantic?. She currently features on the American TV series Quantico 3. She made her Hollywood debut last year with Baywatch. Priyanka is expected to soon start shooting for Salman Khan's Bharat, her first Hindi film in two years.
Comments
Priyanka Chopranick jonas