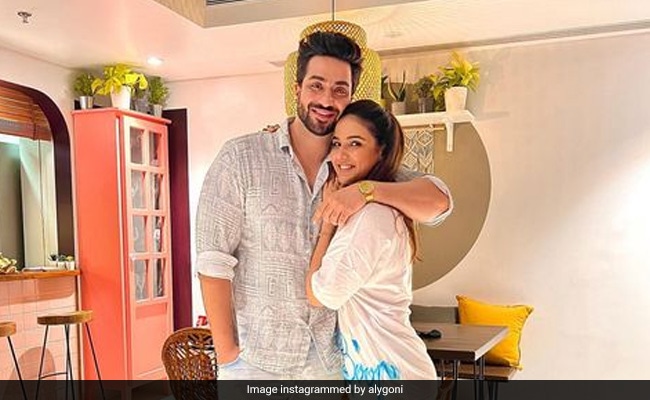 The happiness of buying a house through your sheer hard work is unmatched. Recently, actress Jasmin Bhasin was able to fulfil her dream of buying a house that she can call her own. And one of the first persons to visit her dream house happens to be her boyfriend Aly Goni. He shared an adorable picture of the duo posing in her beautiful new house. Aly is absolutely proud of his girlfriend's achievement and expressed the same through this post.  Aly captioned the picture with words, “I am so proud of you. Congratulations on your new house meri jaan I know how much you have worked hard for this.” To this, Jasmin Bhasin said, "Our home," with a heart emoji. Adorable, isn't it?

Many colleagues and the fans of the duo showered comments and conveyed best wishes in the comments section. Actress Rubina Dilaik -- who was also a participant with the duo in Bigg Boss 14 -- dropped a heart in the comments section. Singer Rahul Vaidya, who is a close friend of the couple, also wrote, “Congratulations Bunty,” tagging Jasmin Bhasin. Shardul Pandit said, "Congratulations Jasmin so so proud of you."

Aly Goni and Jasmin Bhasin often manage to win the hearts of their fans with their adorable chemistry. They never shy away from expressing their love for each other. Once, Aly posted a candid picture where we can see the duo sharing a laugh. Aly captioned the photograph with words, “Mein khushi talaash kar raha tha.. Aur tu mil gayi” meaning “I found you when I was looking for happiness.”

From sharing a profound bond with each other to performing daily activities, there is no doubt that Aly Goni and Jasmin Bhasin love spending time with each other. Here's another photograph that features the duo giving us major couple goals. Aly captioned it saying, “Breakfast, lunch, dinner, Sunday and shopping with this cutie.”

Aly Goni and Jasmin Bhasin know how to ensure that all eyes are on them when they step out for special occasions. Here, the two are flaunting their ethnic wear as they dressed up for a friend's wedding.

Aly Goni and Jasmin Bhasin were last seen together in Bigg Boss 14 and a few music videos.