Allu Arha plays the role of Prince Bharata in Shakuntalam 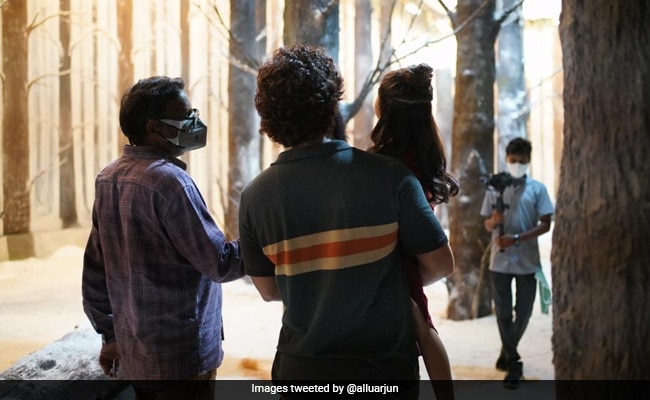 On Monday, something "memorable" happened that Allu Arjun had thought would take place at least 15-20 years later. The actor and his daughter Arha, 4, shot for their different films Pushpa and Shakuntalam, respectively, on the same location, something he expected would happen several years later. Allu Arha plays the role of Prince Bharata in Shakuntalam, which is headlined by Samantha Ruth Prabhu. Sharing a picture of himself holding his daughter in his arms, Allu Arjun wrote this on Monday: "Today my daughter Arha and I are shooting for different films at the same location. So, got to visit her set. I was expecting something like this to happen maybe after 15-20 years. But it happened so soon. Pushpa meets Bharata in Shakuntalam. What a memorable coincidence."

Allu Arha belongs to the fourth generation of Allu-Konidela clan of southern film industry. She is making her acting debut with Samantha Ruth Prabhu's Shakuntalam, which is a mythological film directed by Gunasekhar. The movie also features Dev Mohan in the lead role. It is based on Kalidasa's epic Sanskrit play Abhijnana Shakuntalam.

On Monday, Allu Arjun also shared a glimpse of the party that team Shakuntalam had thrown for little Arha. In his post, Allu Arjun also thanked the makers of the film for "pampering" her daughter on set. "Thank you Gunasekhar garu and Neelima Guna and the entire team of #Shakuntalam for this sweet memorable gesture. The way you and your family pampered her is unforgettable," he wrote.

A couple of days ago, Allu Arjun visited Arha on the sets of Shakuntalam and wrote: "It was nice visiting the sets of #Shaakuntalam. Very heartwarming to see Allu Arha at shoot, it's something I never thought I will see so soon. Thank you Gunasekhar garu, Neelima garu and Samantha Ruth Prabhu for taking such good care of her."

Allu Arjun's Pushpa, directed by Sukumar, will clash with Aamir Khan's Laal Singh Chaddha at the box office on Christmas this year.