Allu Arha belongs to the fourth generation of the Allu family, who is among the few influential clans of southern film industry 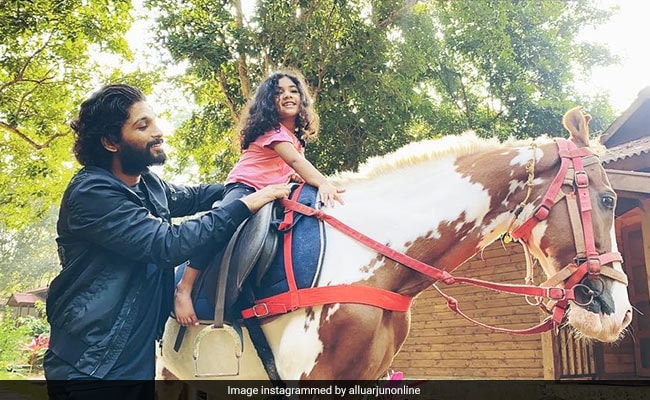 South star Allu Arjun, who belongs to the third generation of Allu-Konidela clan of southern film industry, thrilled the Internet on Thursday by announcing that his daughter Allu Arha will soon make her film debut with Samantha Ruth Prabhu's work-in-progress project Shakuntalam. Exciting, isn't it? Allu Arha will play the role of Prince Bharata in Shakuntalam. In an Instagram post, Allu Arjun, who has worked with Samantha Ruth Prabhu in S/O Satyamurthy and Bunny The Perfect Gentleman, announced his daughter's movie debut and wrote: "A proud moment for the Allu family to announce that the fourth generation, Allu Arha, will be making her debut with Shakuntalam movie."

Shakuntalam is a mythological film directed by Gunasekhar. The movie features Samantha and Dev Mohan in the lead roles. It is based on Kalidasa's epic Sanskrit play Abhijnana Shakuntalam.

Thanking Gunasekhar and his daughter Neelima Guna in his post, Allu Arjun wrote: "I want to thank Gunasekhar garu and Neelima garu for giving my daughter this beautiful movie as her debut."

He added: "I had an altogether different journey with Samantha and am happy to watch Arha debut with her movie. My best wishes to the entire Cast and Crew of #Shakuntalam."

Allu Rama Lingaiah, born in 1922, was a Padma Shri recipient. He had featured in over a thousand films and was known for his comic roles. He had four children - Allu Aravind, Surekha Konidela, Vasantha Lakshmi, and Nava Bharathi. Allu Arjun and Allu Sirish are the sons of Allu Aravind while Ram Charan is the son of Surekha and Chiranjeevi.

Talking about Shakuntalam, the motion poster of the film was unveiled in January this year. Take a look:

Samantha Ruth Prabhu has several times shared pictures of herself from the sets of Shakuntalam on her Instagram stories. The film also stars Aditi Balan and Malhottra Shivam.