"I'm so in awe of what you do and how you do it," wrote Anjula Acharia 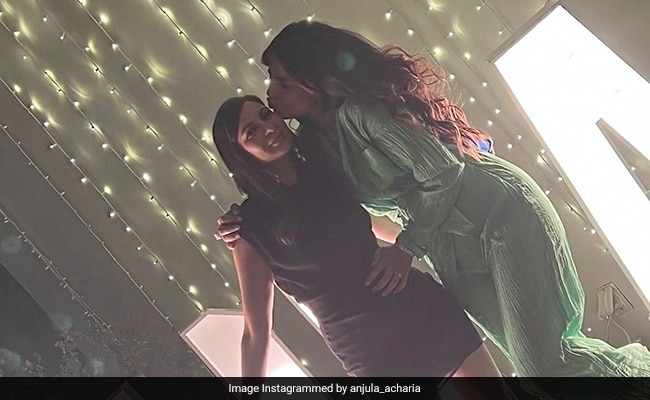 Priyanka Chopra and husband Nick Jonas surely know how to throw a party - be it a festive bash or to host birthday festivities for close friends. Priyanka Chopra hosted one big, fat birthday bash for manager Anjula Acharia in Los Angeles, pictures from which were shared on the latter's Instagram. Sharing a photodump from the celebrations, she wrote in her caption: "Who doesn't love their name in lights ? Especially when done by someone who so naturally sits in the spotlight Priyanka Chopra this was my favourite part of the magical night you planned for me. Wow babe! I'm so in awe of what you do and how you do it."

In another Instagram entry, she wrote: "I'm so overwhelmed and grateful for all the love you showed me this birthday, it was an amazing surprise and so unexpected! You're both so generous and warm hearted, I can't thank you enough! Sakshi Sanaya what was supposed to be a very small girls night out turned into the most delightful surprise, thank you for collaborating with my partner in crime Priyanka Chopra to make this all happen. My heart is so full. Thank you to all my beautiful sisters who made this so special with your energy and love! Thank you."

Here are the photos from the bash shared by Anjula Acharia on Instagram and later curated by fanclubs:

What good is a birthday party if there is no dancing? Priyanka Chopra knows how to be the life of a party.