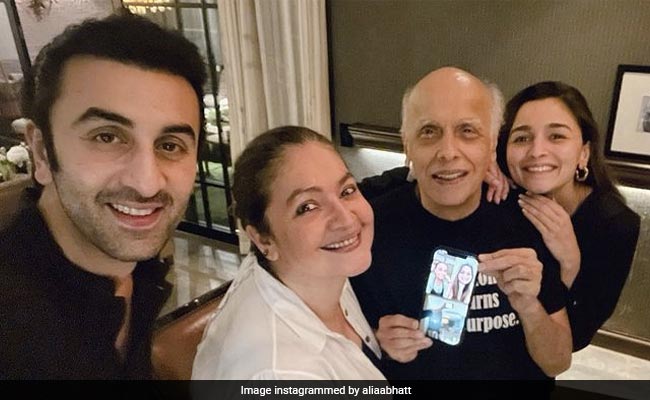 Happy birthday, Mahesh Bhatt. The filmmaker turned 73 on Monday. On his special day, his daughters Alia and Pooja Bhatt shared pictures from his birthday party that was also attended by Alia Bhatt's boyfriend and actor Ranbir Kapoor. In the goofy pictures, Alia can be seen holding birthday balloons, which have "simplicity" and "happy birthday pops" printed on them, and happily posing with Mahesh Bhatt. As you swipe to the last picture of her album, you see a beautiful picture of Alia Bhatt, Ranbir Kapoor, Mahesh Bhatt and his daughter Pooja Bhatt. Mahesh Bhatt's wife Soni Razdan and their daughter Shaheen joined the party via a video call. "73 years young! Happy birthday papa," Alia captioned the photos.

See what Alia Bhatt posted for her father on his birthday here:

Alia Bhatt was last seen in her father's project Sadak 2. She co-starred with Sanjay Dutt and Aditya Roy Kapur in the film. Alia has many films lined up. She will next be seen in Ayan Mukerji's Brahmastra with boyfriend Ranbir Kapoor, Amitabh Bachchan and Nagarjuna Akkineni, in Sanjay Leela Bhansali's Gangubai Kathiawadi and in her own production debut titled Darlings. She recently wrapped the shooting schedule of Darlings.