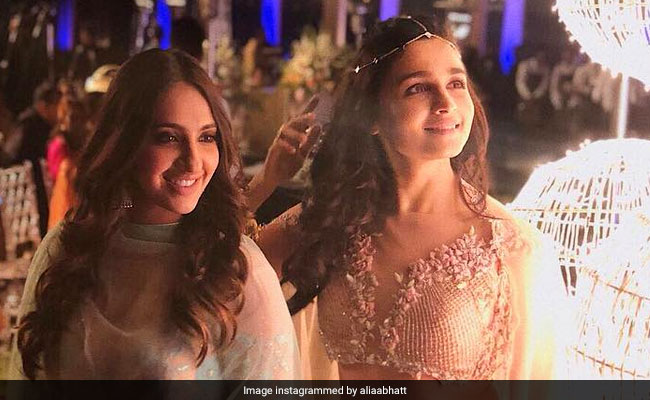 New Delhi: Social media is currently obsessing over Alia Bhatt's pictures from her best friend Kripa Mehta's wedding in Jodhpur. Alia is definitely having a gala time and is enjoying all the shaadi festivities. Alia has already clicked some amazing photos in a bright yellow ensemble at Kripa's haldi ceremony, danced to some famous Bollywood songs at the sangeet function and twirled in that beautiful lehenga at her best friend's wedding - we know all of this because the Internet is filled up with gorgeous pictures of Alia and her BFFs. Striking a pretty pose with her friend Akansha Ranjan Kapoor, Alia wrote: "& the best is yet to come" while in the other picture Alia is all smiles with her friend Devika Advani.

Alia's pictures will definitely give you some shaadi vibes.

& my baby girl is married

& the best is yet to come

These pictures make me all the more emotional

Alia showing some Bollywood jhatkas-matkas at the wedding.

When at a wedding, how can someone forget the joota-chupaai ceremony?

One with the bride.

The happy faces melts my heart

Promoted
Listen to the latest songs, only on JioSaavn.com
Alia Bhatt was overwhelmed to receive so much love from her fans. In her latest Twitter post, she thanked everyone and wrote: "Wonder what I've done to deserve this sudden burst of love! Not complaining just very very touched! Thank you for all the constant love I love you guys tooooooo much."

Wonder what I've done to deserve this sudden burst of love! Not complaining just very very touched! Thank you for all the constant love I love you guys tooooooo much!