Rohit Saraf plays one of Rani Mukerji's students in the film 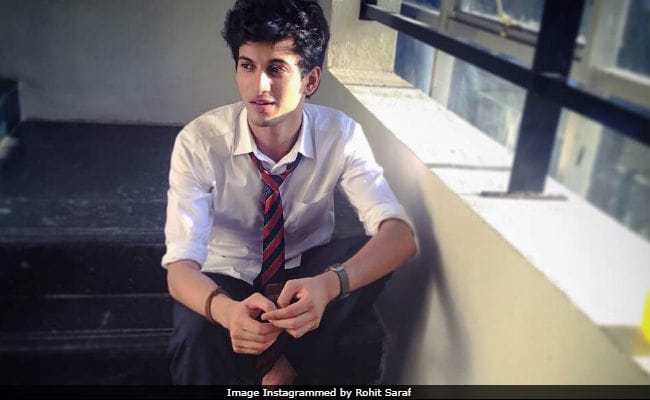 Rohit Saraf on the sets of Hichki (Image courtesy - rohitsaraf10)

New Delhi: Remember Rohit Saraf from Dear Zindagi? The actor, who played Alia Bhatt's younger brother in the film, will now be seen taking academic lessons on screen from actress Rani Mukerji, in their forthcoming release Hichki. Speaking of his role in the film, Rohit told news agency IANS that this new "character" helped him "explore a new emotion" onscreen. "I cannot share a lot about my character, but I'll be playing the role of a student in the school that Rani ma'am is teaching. All I can say is that this character gave me an opportunity to explore a new emotion that I hadn't on screen before," IANS quoted him as saying. Hichki is slated to release on March 23.

Speaking about the experience of working with stars like Rani Mukerji and Alia Bhatt, the 20-year-old actor told IANS, "When I get to work with big names, it's always a bonus. Besides, to me, Rani ma'am and Alia Bhatt are much more than just big names. I believe stardom is not just built on the success or failure of an artiste's films.

Despite being just two-film-old in Bollywood, Rohit has got quite a fan following on social media. The Dear Zindagi actor has over 203k followers on Instagram, alone.

Apart from Dear Zindagi and Hichki, Rohit also featured in an International project primarily shot across India - What Will People Say. He believes that more than the 'star' element in a project, the script and director, appeal him the most. "I have also worked on a Norwegian production (What Will People Say). This film doesn't have what you'd traditionally call a 'star'. To me, what's important is the character, the script and the director," IANS quoted Rohit as saying.

Rohit is a part of an ensemble cast, playing Rani Mukerji's students in Hichki. When he was questioned about whether a star's (Rani Mukerji) presence on the sets affected him while shooting his scenes, he said, "I was extremely intimidated and anxious before I went on set but performing with her in front of the camera for the first time changed that for me. She loves using the word 'darling' and I love her for that."

The plotline of Hichki revolves around school teacher, Naina Mathur (Rani Mukherji), who suffers through Tourette syndrome, a condition forcing an individual to make involuntary repetitive movements or sounds.

Promoted
Listen to the latest songs, only on JioSaavn.com
With Hichki, Rani Mukerji returns to the big screen following a four-year break. She last appeared in 2014's film Mardaani.