"It's been an unforgettable experience working with you," wrote Alia Bhatt On filmmaker SS Rajamouli's 49th birthday on Monday, Alia Bhatt shared a special greeting on her Instagram story. The actress, who worked with the director in the magnum opus RRR, shared a behind-the-scene picture of herself and SS Rajamouli from the film's set. Alia accompanied the picture along with a note, in which she referred to him as a "master storyteller." She wrote in the note: "Happy birthday to the master storyteller. It's been an unforgettable experience working with you. Wishing you all the love and happiness in the world." Meanwhile, other RRR stars including Jr NTR, Ram Charan and Ajay Devgn also wished the filmmaker.

This is what Alia Bhatt posted: 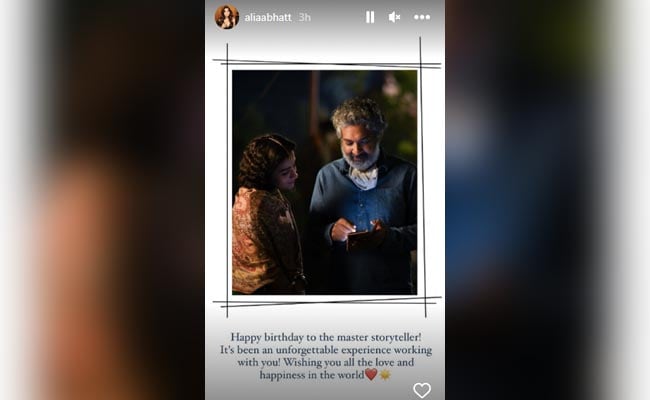 Words truly cannot explain how much I respect and adore you...

"Happy birthday dear Rajamouli Sir. Have a fabulous one. I love your vision and all of us love your cinema. Keep making India proud Sir. Most importantly, today is your day," wrote Ajay Devgn.

Happy birthday dear Rajamouli Sir. Have a fabulous one.
I love your vision & all of us love your cinema. Keep making proud Sir. Most importantly, today is your day @ssrajamoulipic.twitter.com/q5qCVDJLsV

RRR, set in the 1920's, is a "fictitious story based on two legendary freedom fighters - Alluri Seetharamaraju and Komaram Bheem." It boasts of an impressive cast which included Ram Charan and Jr NTR in lead roles. It also starred Alia Bhatt, Ajay Devgn, Olivia Morris, Samuthirakani, Alison Doody, Ray Stevenson. The film opened to largely positive reviews from film critics and needless to say, an overwhelming response from the audience, both in India and across the globe.

RRR was SS Rajamouli's first project after the 2017 blockbuster Baahubali 2: The Conclusion, which was a massive success as well. The film released across the globe in Hindi, Tamil, Telugu and Malayalam simultaneously. The film's release dates were pushed multiple times due to the pandemic and the lockdowns. Almost two months after its theatrical release, the film began streaming on Netflix. According to the OTT giant, RRR (Hindi) became "the most popular Indian film on Netflix around the world" in June.