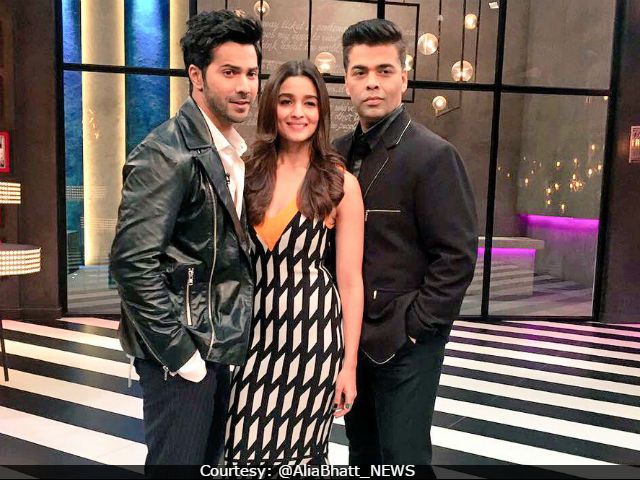 Karan Johar with Alia and Varun on the sets of Koffee With Karan (Courtesy: AliaBhatt_NEWS )

New Delhi: Bollywood celebrities like Alia Bhatt, Varun Dhawan, Farah Khan, Priyanka Chopra and other stars expressed their happiness for filmmaker Karan Johar, who became a father to twins- a boy and a girl- through surrogacy. The 44-year-old director has named the baby boy Yash after his father, and the girl will be called Roohi. Karan introduced Roohi and Yash to the world via social media and wrote, "Two most wonderful additions to my life and lifelines." Alia Bhatt and Varun Dhawan were among the first stars to congratulate their mentor and now a proud father. The children were born last month in Mumbai's Masrani Hospital, a TOI report said.

Calling Roohi and Yash as their "younger siblings," Alia tweeted, "Finally I can say I have a younger brother AND sister!!!!!! So so so happy, soo much love to give uff bursting with joy!!!!!" while her Badrinath Ki Dulhania co-star Varun Dhawan posted, "Karan your the best human being I know and Im sure you will make the best dad. Can't wait to meet these lil munchkins." Alia Bhatt and Varun Dhawan, will star in Karan's latest production Badrinath Ki Dulhania, which releases on March 10.

Here's what Alia and Varun posted:

Finally I can say I have a younger brother AND sister!!!!!! So so so happy soo much love to give uff bursting with joy!!!!! https://t.co/HCMkoR5JWL

Karan your the best human being I know and Im sure you will make the best dad.Can't wait to meet these lil munchkins https://t.co/iDl4XswvRG

On Twitter, Karan Johar wrote: "I am ecstatic to share with you all the two most wonderful additions to my life, my children and lifelines; Roohi and Yash. I feel enormously blessed to be a parent to these pieces of my heart who were welcomed into this world with the help of the marvels of medical science. This was an emotional yet well thought out decision which I have taken after considering all the responsibilities and duties that come with being a parent."

Karan also said that his children will now be his priority and his "work, travels and social commitments" would take a back seat and he is prepared for that.

There is a long list of other celebrities who also wished the filmmaker on his newfound parenthood.

Congratulations @karanjohar so happy for you. May Yash and Roohi always have a beautiful healthy life. Much love always

I'd such a big smile this morning when I read about this.
Lots and lots of love @karanjohar and a big hearty congratulations. https://t.co/sfksLcoRUu

Glad u took my advice seriously @karanjohar Best thing to happen to you.. n theyll b the youngest people you hang out with so all's good

@karanjohar this is so sweet..congratulations welcome to the world of dark circles n load of diapers yet absolute meaning to life n bliss

@karanjohar Congratulations Karan, this is the best news in years. You will make an amazing parent. Love to the little ones. God bless.

During the launch of his book, The Unsuitable Boy, Karan had expressed his desire to become a father. "I don't know what I'm going to do about it but I feel like I would like to be a parent," he writes in the book.

Promoted
Listen to the latest songs, only on JioSaavn.com
Karan Johar is the son of late filmmaker Yash Johar and Hiroo Johar. Yash Johar, one of India's most-celebrated filmmakers of Bollywood died in 2004.

Karan Johar has some of the biggest Bollywood hits in his name. His first film, as a director Kuch Kuch Hota Hai, was one of the most-successful films of the year. He later made blockbusters like Kabhi Khushi Kabhie Gham, Kal Ho Naa Ho, My Name Is Khan, My Name is Khan. His last film was 2016's Ae Dil Hai Mushkil. His production house, Dharma Productions last release was Kapoor and Sons and now they are all set to release Badrinath Ki Dulhania.