Alia Bhatt, who attended Ranbir Kapoor's birthday party on Wednesday, shared a new picture of herself in Kashmir, where she was recently filming Raazi 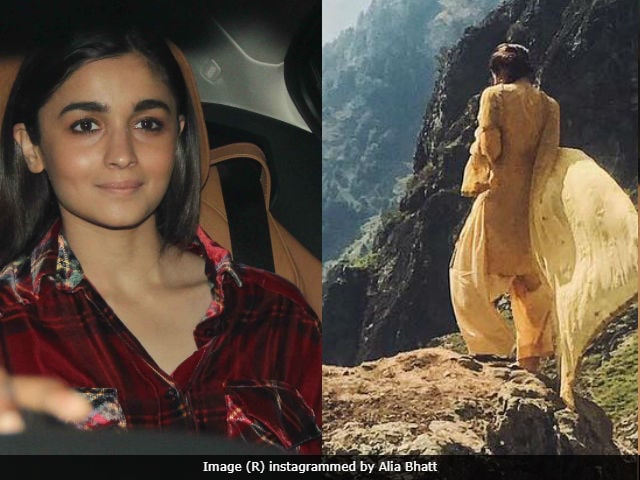 New Delhi: Actress Alia Bhatt was filming upcoming Raazi in Kashmir and she returned to Mumbai only recently but it seems that her heart is still somewhere in the northern state. Alia Bhatt shared a new picture from picturesque Kashmir and captioned it: "It's a beautiful day to leave me alone." Clearly Alia Bhatt has left Kashmir but Kashmir hasn't left Alia Bhatt. On Wednesday, Alia had shared a picture from a similar location with director Meghna Gulzar and co-star Vicky Kaushal announcing the film's schedule wrap. Here are some fabulous pictures shared by Alia Bhatt:

It's a beautiful day to leave me alone

And it's a wrap

Alia first filmed for Raazi in Punjab - that schedule was extended because they had to cancel shoot for a couple of days after Dera Sacha Sauda chief Gurmeet Ram Rahim's conviction on August 25. The team swiftly completed their portions from Punjab and shifted to the next leg - in Kashmir.

Alia Bhatt shared pictures of the gorgeous valley and of herself enjoying a shikara ride with her friend Anushka Ranjan.

Ranbir Kapoor and Alia Bhatt also have film in the pipeline, which will be directed by Ayan Mukherji. The film will be produced by Karan Johar's Dharma Productions and it's not called Dragon, KJo confirmed today. Alia Bhatt will also star opposite Ranveer Singh in Gully Boy, to be directed by Zoya Akhtar.