Alia Bhatt, Vicky Kaushal And Meghna Gulzar In A Postcard-Worthy Pic From Kashmir 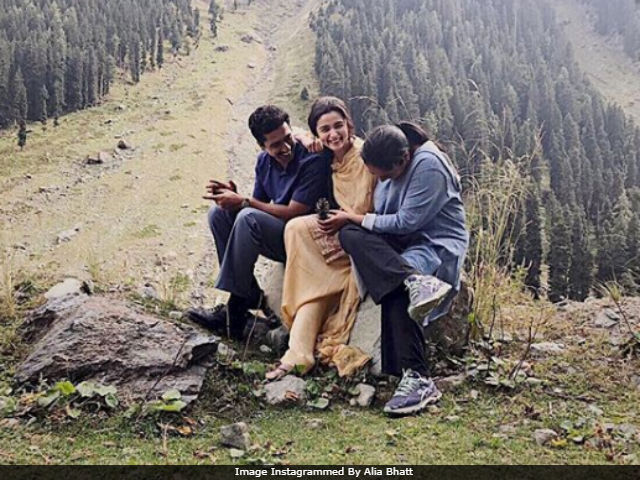 New Delhi: Actress Alia Bhatt, who has been sharing amazing pictures from Kashmir, has wrapped the shooting schedule of Raazi, her forthcoming film. Alia, 24, shared a postcard-worthy picture from the sets of the film with co-star Vicky Kaushal and director Meghna Gulzar. "And it's a wrap," Alia captioned her post, adding a heart emoticon. Raazi went on floors in July, and film's first shooting stop was Punjab. In Raazi, Alia features as a Kashmiri woman married to a Pakistani army officer, played by Vicky. It is based on Harinder Sikka's novel Calling Sehmat and will also be shot in Mumbai. Here's the picture which Alia Bhatt shared.

And it's a wrap

Can you spot Alia and Vicky in the picture?

Alia checked in Kashmir earlier last week. Her itinerary included the traditional boat ride (Shikara), a sip of the kahwa tea and a trip to the beautiful locales in the Valley. She was accompanied by her best friend Akansha Ranjan Kapoor.

These pictures shared by Alia shouldn't be missed. (Scroll down to see them. You can thank us later).

A million unforgettable memories, a gazillion inside jokes & a trillion shared secrets! Happy birthday my soul friend.. the word best friend seems too basic after 24 years :) here's to several handful of cashews, mishaps in the park and moments in the dark haha sorry that's the only thing that rhymed! Love you chicaaaaaa @akansharanjankapoor

Our favourite - This picture of Alia and Meghna Gulzar. We just cannot take our eyes off Alia's beautiful Kashmiri pashmina shawl.

Promoted
Listen to the latest songs, only on JioSaavn.com
Meanwhile, of co-starring with Alia, Vicky Kaushal earlier told news agency IANS, "Getting a chance to work with Alia Bhatt, inarguably one the finest actresses in our industry at the moment, is a big deal for me. I am really very excited to be a part of the film. She has worked wonderfully in her movies and brings something new with each film. She sets a new benchmark with her releases."

Raazi releases in May next year.