Alia Bhatt On Being With Ranbir Kapoor On Gully Boy Day: 'I Was Definitely Valentining' 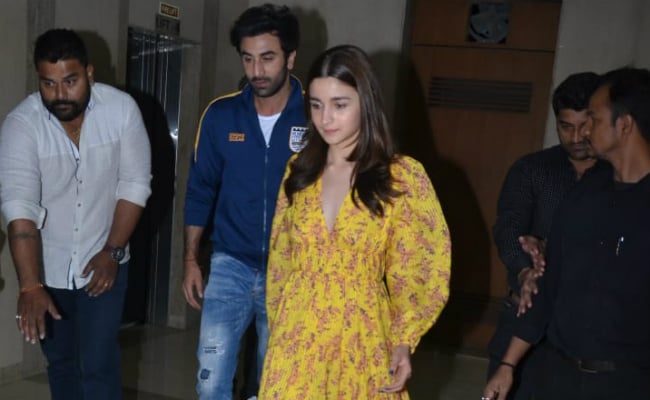 Alia Bhatt, who has never confirmed her relationship status with Ranbir Kapoor in as many words, sliced out time amidst her busy schedule to have a Valentine's Day dinner date with the 36-year-old actor. In a recent interview with The Asian Age, the actress was asked to elaborate on how her Valentine's Day celebrations were, when she smartly dodged sharing details of the dinner date with this response: "I was definitely Valentining on that day. Since I've been promoting Gully Boy, I had a late night and woke up late on Valentine's Day. I was flooded with messages and greetings about our film along with some Valentines' greetings and some marriage proposals from strangers as well," The Asian Age reported her as saying. Alia's new film Gully Boy, co-starring Ranveer Singh, also released on February 14.

Alia Bhatt added that she was in constant touch with Ranveer Singh on the release day and that "helped each another get over our anxiety." When she was asked why he didn't reserve the entire day for Ranbir, Alia replied: "There was time for Ranbir also, don't worry," reported The Asian Age.

Alia was also fired the often-asked question about Ranveer and Ranbir's similar sounding names. "Trust me I've no problem telling them apart. Ranbir and Ranveer are two very different people. Even their names, though they may sound similar to the outside world, they are quite separate in my head and in my speech," The Asian Age quoted Alia as saying.

Meanwhile, Alia Bhatt and Ranbir Kapoor wrapped Valentine's Day with a unique dinner date. The rumoured couple enjoyed a three-course meal prepared by Ranbir's personal chef Harsh Dixit, who shared a photo of the two from the dinner date at Ranbir's Mumbai residence.

Alia Bhatt and Ranbir Kapoor also trended recently for reports that the two had a tiff at the Gully Boy screening on the eve of the film's release. Speculation began after Ranbir and Alia appeared to have a serious conversation in several videos on social media. Alia Bhatt and Ranbir Kapoor will be seen together in Ayan Mukerji's next film Brahmastra. This will mark their first film together.