"And off I go to shoot my first ever Hollywood film!!!! Feel like a newcomer all over again," wrote Alia Bhatt 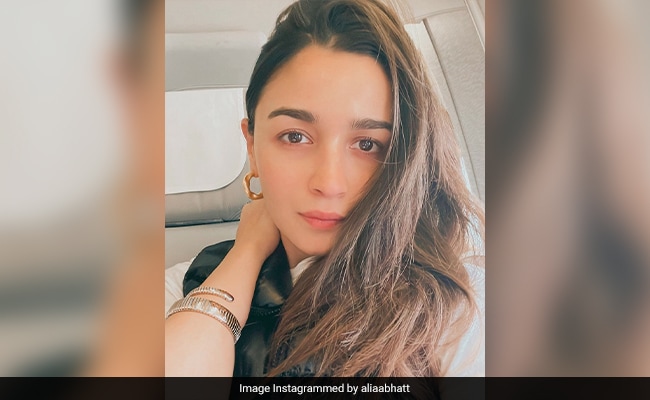 Alia Bhatt, who is ruling the Indian film industry with her back-to-back hit films, is all set to start her Hollywood journey. The actress shared a post on her Instagram handle informing her fans that she was jetting off for the shoot of her Hollywood debut, upcoming movie Heart of Stone. In the film, the actress will be starring alongside Gal Gadot and Jamie Dornan. In the post, the actress looks alluring in a black and white top and accessories her look with gold hoop earrings and a bangle.

Sharing the post, Alia Bhatt wrote, "And off I go to shoot my first ever Hollywood film!!!! Feel like a newcomer all over again - sooooo nervous!!!! Wish me luckkkkkkk".

Alia Bhatt, last month, got married to her longtime boyfriend, Ranbir Kapoor, in an intimate wedding ceremony attended by their family and close friends. The couple recently celebrated their one-month anniversary on May 14. The actress shared some unseen post-wedding pics and dropped several emoticons in the caption.

Talking about the movie Heart of Stone, the American spy drama is helmed by Tom Harper and also stars Sophie Okonedo, Matthias Schweighofer, Jing Lusi, and Paul Ready. The film will release on Netflix.

On the work front, Alia Bhatt was recently seen in two hit films, Gangubai Kathiawadi and RRR, starring Ram Charan and Jr NTR in the lead roles. Next, she will be seen in Karan Johar's directorial Rocky Aur Rani Ki Prem Kahani, co-starring Ranveer Singh and Brahmastra with her husband, Ranbir Kapoor. Also, she will be debuting as a producer with the film Darlings.