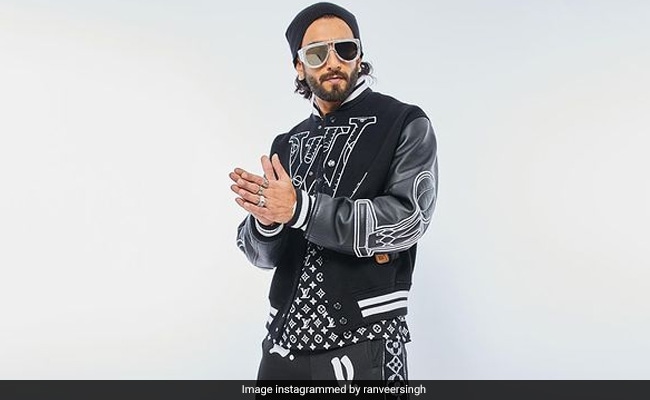 Ranveer Singh, who is all set to play basketball at NBA (National Basketball Association) All-Star Celebrity Game, shared new photos. He is dressed in a monochrome T-shirt, a pair of track pants, and a dapper jacket, and everything is from the house of Louis Vuitton. Ranveer's photos have left everyone including Alia Bhatt impressed. She commented, "Ummm Lewkkkk." Rohit Bose Roy, who wants Ranveer's jacket has commented, "Superb!! Now you HAVE TO gift me this jacket." Ranveer Singh completed the look with matching shoes and grey sunglasses. For the accessories, the Gully Boy actor chose funky rings. He shared the photos with the hashtags "#NBAAllStar and #NBA75" and also tagged "@louisvuitton @nbaindia and @nbastyle_in." Ranveer Singh has been styled by Shaleena Nathani.

Every year, celebrities from the world of entertainment and music rub shoulders with some of the past and present basketball legends. Ranveer Singh will play the All-Star Celebrity Game which is part of the All-Star Weekend. NBA All-Star weekend is three days of festivities which goes from Friday to Sunday. This year, the game will be played on February 18 at the Wolstein Center in Cleveland. The star-studded weekend has various basketball games and contests that feature celebrities and many of the league's stars.

Ranveer Singh is a part of Team Walton. He has joined international celebrities and athletes to play basketball in NBA's All-Star Celebrity Game in the US. Ranveer is set to play alongside comedian Tiffany Haddish, rappers, and recording artists like Anuel, Machine Gun Kelly, Jack Harlow, and Quavo. Ranveer's team has been coached by NBA legend Bill Walton.

A few days back, Ranveer had interacted with his fans on Instagram through a Q&A session. He had revealed that he has started preparing for the big match, which is set to take place on February 18, in Cleveland. He had said, "I'm flying to Cleveland to play the NBA Celebrity All-Star Game later this month. Better get some practice, varna naak kat jayegi." Last year, in September, Ranveer Singh was also appointed as NBA's brand ambassador for India.

Shah Rukh Khan Was Asked To Give A "Genuine Review" Of Pathaan. His Reply