Alia Bhatt Features In Neetu Kapoor's 'All The Heartbeats' Album. She Sends Kisses 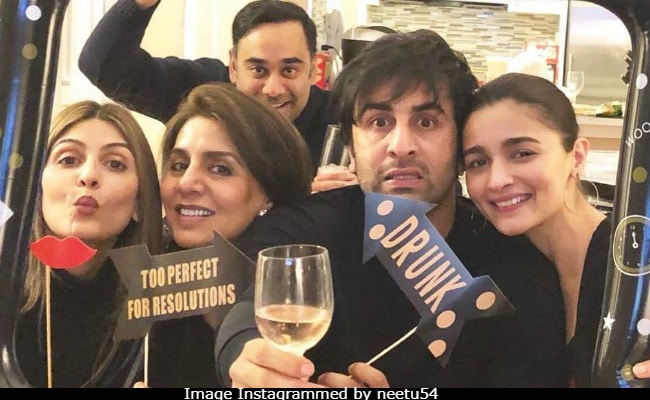 Though neither Alia Bhatt nor Ranbir Kapoor have never confirmed they are dating in as many words, the 25-year-old actress' social media exchanges with Neetu Kapoor appear to speak volumes. Alia recently joined the Kapoors for their New Year celebrations in New York, pictures from which had sent the Internet into a meltdown. On Tuesday, Neetu Kapoor shared few more glimpses of what appears to be her New York diaries on Instagram and captioned it as: "All the heartbeats in these." While Neetu Kapoor's granddaughter Samara is clearly the star of the album, the last entry features Alia, Ranbir, Riddhima Kapoor and Bharat Sahni in a priceless frame.

The photo was previously shared by Riddhima on New Year but it's always good to see Alia with Ranbir's family. Alia, who was quick to spot Neetu Kapoor's post, left a comment on Instagram - she sent kisses to her. Aww, so cute.

Alia Bhatt and Ranbir Kapoor touched down in Mumbai over the weekend. When in the Big Apple, the Kapoors and Alia spread festive cheers all over town.

Neetu Kapoor's rapport with Alia appears to be a lot cordial than what was the case with Ranbir's exes - Deepika Padukone and Katrina Kaif. Neetu Kapoor shared a sneak peek from a family lunch, also featuring Alia. Since September, Rishi Kapoor has been in New York for medical treatment for an undisclosed ailment.

On the work front, Ranbir Kapoor and Alia Bhatt will co-star for the first time in Ayan Mukerji-directed Brahmastra, which hits screens this year. The epic trilogy also features Amitabh Bachchan in a key role. Alia Bhatt also has Gully Boy releasing on February 14.