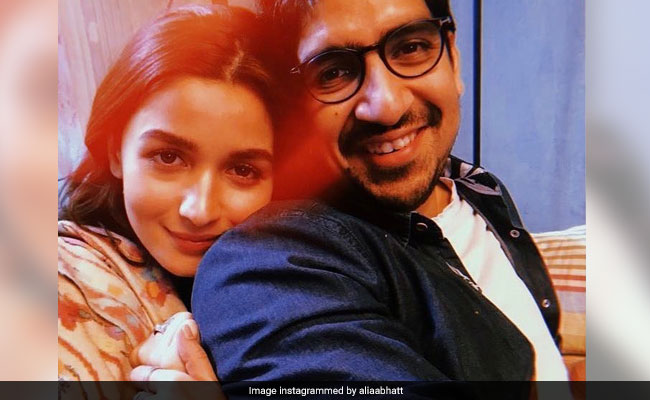 Actress Alia Bhatt, who was shooting for her upcoming film Brahmastra with Ranbir Kapoor in Mumbai, announced the schedule wrap of the film with a picture on Instagram. In the picture, Alia can be seen posing with her Brahmastra director and close friend Ayan Mukerji. "And that's a schedule wrap for Brahmastra," Alia captioned the photo on her Instagram timeline. The picture has been liked by Riddhima Kapoor, Kiara Advani, Jacqueline Fernandez, Shweta Bachchan, Ananya Panday, Abhishek Bachchan and Shaheen Bhatt. Ranbir and Alia co-star for the first time in the Ayan Mukerji-directed film. Brahmastra is a three part fantasy trilogy, which also stars Amitabh Bachchan, Dimple Kapadia, Mouni Roy and Akkineni Nagarjuna. Mouni Roy plays the antagonist in the film.

BTS photos of Alia Bhatt and Ranbir Kapoor from the Mumbai sets of Brahmastra hit the Internet last month and went crazy viral. In one of the photos, Ranbir can be seen in the midst of a conversation with Ayan Mukerji while Alia Bhatt can be seen standing beside them. Alia and Ranbir were also photographed together outside a dance class in Mumbai.

Ranbir Kapoor and Alia Bhatt spent a long period in Bulgaria earlier this year, where Brahmastra was shot extensively. Alia Bhatt kept her fans updated with photos from the picturesque locales of Bulgaria. Ranbir Kapoor and Ayan Mukerji often featured on her posts from Bulgaria. The Bulgaria schedule wrapped in September, following which Ranbir flew off to the US to be with father Rishi Kapoor, who is currently in New York for treatment.

Brahmastra is a three-part fantasy trilogy, which will release in Christmas next year. Speaking about the film in an interview to news agency PTI Alia said: "We are very excited for the film. It is a step ahead. This will take cinema to another level. I am excited for next year."