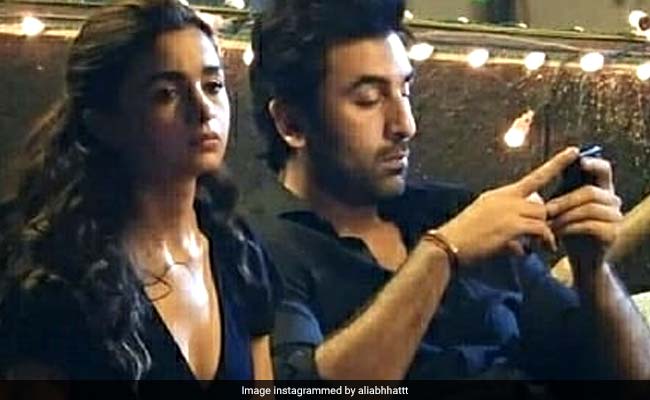 Ayan Mukerji's Brahmastra will be 2019's big Christmas release and actors Ranbir Kapoor and Alia Bhatt are currently shooting for the film in Mumbai. BTS photos of the actors from the sets of Brahmastra hit fan clubs on Saturday morning and went crazy viral. In the pictures curated by fan clubs, Ranbir looks busy with his phone while Alia Bhatt can be seen sitting beside the actor. In another picture shared on the fan clubs, Alia and Ranbir can be seen in the midst of a conversation with Brahmastra director Ayan Mukerji. The film also features Amitabh Bachchan, Mouni Roy, Dimple Kapadia and Akkineni Nagarjuna.

Take look at the photos of Ranbir and Alia shared on fan clubs:

Rumoured couple Ranbir Kapoor and Alia Bhatt will be sharing screen space for the first time in Brahmastra. Speaking to news agency IANS, Ali Bhatt had earlier said: "We are very excited for the film. It is a step ahead. This will take cinema to another level. I am excited for next year."

Ranbir Kapoor, Alia Bhatt, Amitabh Bachchan along with cast of Brahmastra spent a long period in Bulgaria shooting for the film. Alia often updated fans with photos from the picturesque loacales of Bulagaria. Ranbir, who is a social media recluse, often featured in her Instagram post. They wrapped the film's Bulgaria schedule in September, following which Ranbir flew to the US with his family to be with father Rishi Kapoor, who is undergoing treatment for an undisclosed disease. Ranbir and Alia resumed work on Brahmastra last week, when they were spotted exiting a dance class together.

It means no worries, for the rest of your dayssss...hakuna matata